The gas turbine will travel from Berlin to Rotterdam, and then by sea to the Humber Estuary, where it will travel down inland waterways to reach the construction site 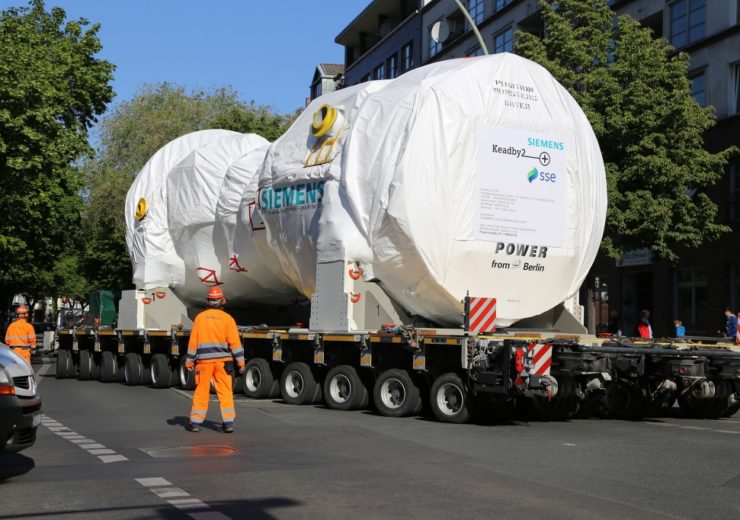 As part of a new combined cycle power plant, the largest, most powerful, and most efficient Siemens gas turbine to date will have a baseload efficiency of 63 percent and an output of 840 Megawatt – enough to provide electricity to a city with 3.3 The SGT5-9000HL measures 13 meters in length as well as five meters in width and height respectively. (Credit: Siemens.)

German automation company, Siemens has loaded its heavy-duty gas turbine onto an inland cargo ship in Berlin to transport them to Scottish energy company SSE Thermal’s Keadby 2 project in Lincolnshire.

The shipment follows an agreement signed by Siemens in 2018, to provide turnkey solution for the 840MW gas-fired power plant.

The gas turbine, which are built by Siemens Gas and Power in its Berlin factory, will travel from Berlin to Rotterdam, and then by sea to the Humber Estuary, where it will travel down inland waterways to reach the construction site.

Once received, the SGT5-9000HL turbine with 593MW of capacity will first be tested and then be expanded into a combined cycle power plant with 840MW and over 63% baseload efficiency.

Siemens is constructing the Keadby 2 facility for SSE Thermal to test the 50-Hertz version of the HL-class turbines.

“I’m pleased that we were able to complete the turbine assembly work during these challenging times, despite all the restrictions imposed by COVID-19, and that we managed to successfully send the machine off on its journey to the power plant location in the UK.”

The new turbine at the power plant is scheduled to begin operations in 2021 and SSE Thermal has planned to place the turbine into commercial operation in 2022, after successful testing.

SSE Thermal managing director Stephen Wheeler said: “The construction of Keadby 2 is a key part of our strategy to decarbonise our thermal power generation and complement the growth of renewables as we transition to net zero.

“We’re also exploring the potential for further decarbonisation in the Humber region through carbon capture and hydrogen solutions as routes to market develop.”