SSE announced that Scotland’ Beatrice offshore windfarm has began generating power, which was exported to the national grid for the first time. 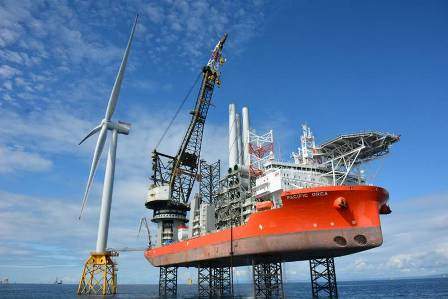 Beatrice, which is claimed to be the country’s largest offshore wind farm, has started producing power following the installation of the first 7MW turbine.

UK Government Energy Minister Claire Perry said: “Through our modern Industrial Strategy we are generating more clean energy than ever before with an impressive 15% of UK electricity coming from wind last year – up from less than 3% in 2010.”

The installation of the first turbine marks the start of the final stage of Beatrice’s project, which is expected to be fully operational in 2019.

Once operational, the Siemens Gamesa turbines on the £2.6bn wind farm will hold capacity to produce power that can be supplied to around 450,000 homes, enabling to make a significant contribution to the UK’s renewable energy targets.

Located 13km off the Caithness coast, the Beatrice windfarm is said to be the largest private investments in Scottish infrastructure. It is also the largest offshore wind farm in the world developed using jacket foundations.

With a weight of 1,000 tonnes and installed in water depths of up to 56m, the jackets are the deepest water fixed foundations of any offshore wind farm,

Beatrice’s project director John Hill said: “We often talk about key milestones along a project’s journey, and Beatrice has had quite a few to date, but to see the first turbine turning in the Moray Firth and to have reached first power safely, ahead of programme and on budget is a fantastic achievement for everyone connected to the project.

“The project has already brought several benefits to the local community, the UK supply chain and, once completed, Beatrice will make a significant contribution to Scotland’s ambitious renewable energy targets.”