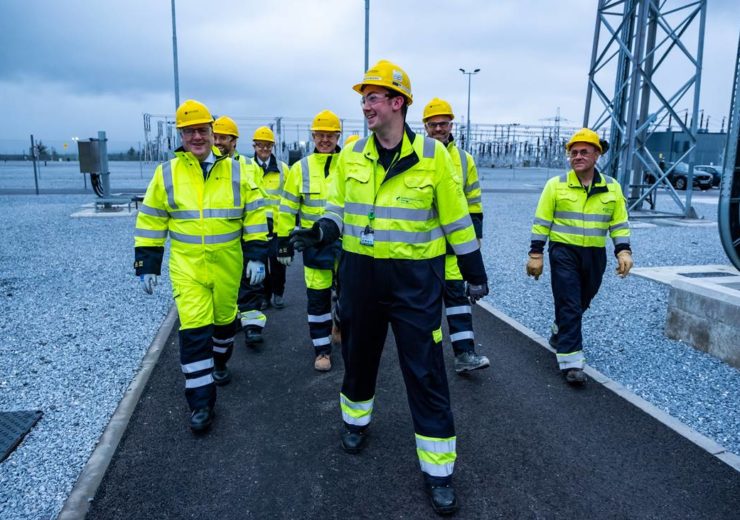 Image: The Caithness-Moray transmission link has been officially commissioned. Photo: courtesy of SSE.

The Scottish Government’s Minister for Energy, Connectivity and the Islands, Paul Wheelhouse MSP, marked the official completion of SSEN Transmission’s flagship Caithness-Moray HVDC link with a visit to Blackhillock substation in Moray.

The £1bn transmission link, delivered on time and within regulatory allowances, has unlocked the vast renewables potential of the north of Scotland. The link and all associated onshore transmission infrastructure has also increased the reliability of the transmission system in the north of Scotland, supporting the Electricity System Operator, National Grid, in its continuous balancing of electricity supply and demand. The link has been operational since January this year with all major works associated with the project completed in the summer.

The 113km subsea link uses HVDC technology, allowing the efficient transfer of up to 1,200MW of clean renewable electricity from Spittal substation in Caithness to areas of demand in central Scotland and beyond.

With both the Scottish and UK Government legislating for net zero emissions, Caithness-Moray represents a critical investment in the fight against climate change, allowing SSEN Transmission to connect more renewables to the national grid and transporting that clean power to areas of demand.

As well as harnessing the renewable output from electricity generators in Caithness, the link also has capacity to support the proposed transmission links connecting Orkney and Shetland, home to some of the UK’s greatest renewable resources.

“Today marks a major milestone in our plans to evolve Scotland’s energy infrastructure to adapt to the growing demand for renewable energy as a route to decarbonisation of our power, transport and heating systems. Not only that, but the new Caithness-Moray link, which uses efficient HVDC technology, strengthens the security of our electricity system, and connects our huge renewable resources with new demand and markets. In such a way, this new HVDC link will play a key role in achieving Scotland’s vital, but challenging greenhouse gas emissions targets and helps us to move to net zero emissions across other areas of our economy, as we respond to the global climate emergency.”

“We would like to thank the Minister for taking the time to visit Blackhillock substation and find out more about the critical role the north of Scotland is playing in meeting our electricity needs and supporting the transition to net zero.

“Achieving net zero will require significant investment across all parts of society, with a requirement on each and every one of us to play our part. On Monday this week we set out proposals to invest a minimum of £2.4bn from April 2021 to March 2026 which would result in our network supporting enough renewable electricity to power 10m GB
homes.

“Caithness-Moray is already playing a critical role in the fight against climate change and we look forward to building on this contribution in the coming years.”