Rosneft has put into commission the West Erginskoye field that is a part of the Erginsky cluster. Chief Executive Officer of Rosneft Oil Company Igor Sechin ordered to launch the first oil shipment via teleconference during the Annual General Meeting of Shareholders of the Company that is taking place in St. Petersburg. 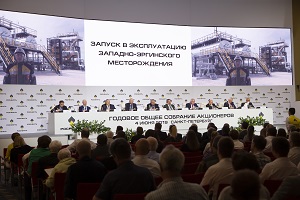 Image: Officials from Rosneft among others. Photo: courtesy of ROSNEFT.

The West Erginskoye filed was prepared for the commissioning in the shortest time possible—in less than a year and a half. Such high rates of field development were possible to achieve due to the use of new methods of drilling and well construction, modern technology and engineering solutions, as well as the existing infrastructure of the Kondinsky field.

There are 49 wells drilled at the West Erginskoye field at the moment. The recoverable reserves of the field amount to 23 million tonnes of oil.

In order to ensure the efficient production of the hard-to-recover reserves of the Erginsky project, most advanced technology is applied: horizontal drilling managed in real time, multi-stage fracking featuring high-tenacity polymer propping agent, and other solutions for reservoir performance.

Over 130,000 tonnes of materials, equipment, and fuel were brought to the West Erginsky field in harsh transport infrastructure conditions. The main load of cargoes for construction and operation was delivered via winter roads. At the field, infrastructure facilities were built, including a booster pump station and a 48-km pipeline to the central gathering plant of the Kondisnkoye field. All of the equipment was manufactured in Russia. Over 500 highly qualified builders and other specialists were working at the filed daily. As for rotating personnel, they were provided with comfortable housing and recreational areas in shared households of the field support base.

A power plant with a total capacity of 18 MW was commissioned at the field, which fully provides the production infrastructure with electricity, including through the rational use of associated petroleum gas.

Rosneft has established the new oil and gas production centre in Khanty-Mansi Autonomous District—Yugra, a key region for the Company, where its large assets are located, such as RN-Yuganskneftegaz, Samotlorneftegaz, Varyeganeftegaz, and Nyaganneftegaz. Erginsky cluster is one of the priority projects for Rosneft.

The Company’s integrated approach and the sequential commissioning of the Erginsky cluster with a single system of transport, energy supply, and development management ensure the high synergy and accelerated development of the cluster’s resource potential.