Rosenergoatom to use eco-friendly power line at Leningrad NPP 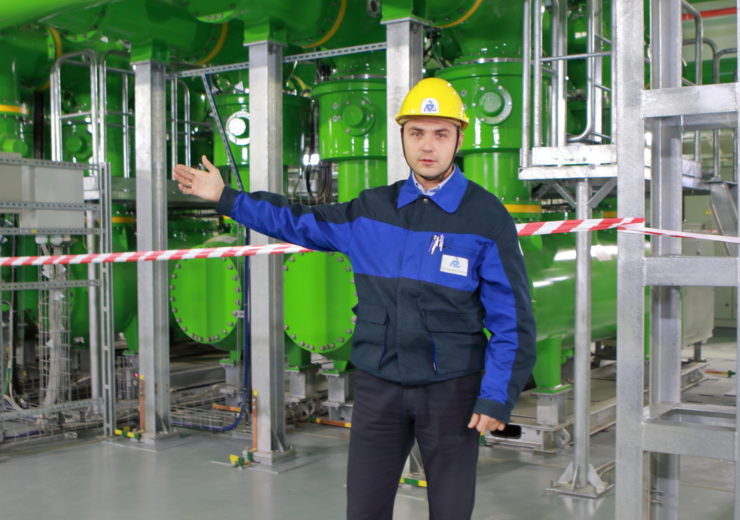 The team at the Leningrad NPP 2nd VVER-1200 power block has completed the high-voltage tests of the gas-insulated conductor. It will be used to transmit electric power from the external networks to cover in-house needs, specifically, to complete large-scale pre-launch activities. Once the power block is connected to the grid, the situation will reverse: all produced electric power will ‘flow’ to consumers through the gas-insulated conductor.

‘A gas-insulated conductor is a great alternative for cable lines. It is ec-friendly, has lower electromagnetic field impact on nature, boasts high capacity and low power waste, is protected from any external effects, endurable and safe for the staff. And with it being so low-profile, it is a perfect solution for our small site, as it does not need a protection zone’, Alexander Rudnik, deputy chief engineer at the Leningrad NPP-2 in charge of electric technical equipment, said.

The pressure tests have verified that the installation was completed with due quality and that there are no damages or leaks. ‘The gas-insulated conductor is leak tight and can handle a 330 kv voltage. We can guarantee its reliable operation. The conductor will be used for smooth delivery of electric power to the residents of the North-West region. Once the 2nd VVER-1200 power block is commissioned, the conductor will deliver almost 30 mln kWh into the grid on a daily basis. This will add up to over 10 billion kWh annually’, Alexander Belyaev, the chief engineer of the Leningrad NPP-2, noted.

The physical launch of the 2nd VVER-1200 power block is scheduled for Q2 2020, which will be followed by its connection to the grid and the trial production. The commissioning is planned for early 2021.

The Leningrad NPP is an affiliate of the Rosenergoatom Joint-Stock Company and is located in the city of Sosnovy Bor, 40 km west from Saint-Petersburg, at the shore of the Gulf of Finland. The Leningrad NPP is the largest one in Russia with regard to the installed capacity (4,200 megawatt) and is the only one featuring two reactor types: it runs three RBMK-1000 reactors (uranium-graphite channel-type reactors on thermal neutrons with the capacity of 1,000 megawatt) and one 3+ generation VVER-1200 reactor (pressurized water-type reactor with the electric capacity of 1,200 megawatt). The country’s first RMBK-1000 power block was stopped for proper shutdown on December 21,2018. The construction of the 2nd VVER-1200 power block is in progress. The owner and developer of the Leningrad NPP’s replacement capacity construction project is the Rosenergoatom Joint-Stock Company. AO ATOMPROJEKT is the general designer, while the AO TITAN-2 JOINT-STOCK Company is the general contractor.

Compared to the traditional VVER-1000 power blocks, the new Leningrad NPP 3+ generation VVER-1200 power blocks have a number of benefits that significantly increase their economic indicators and safety. For example, the electric capacity of the reactor facility has been increased by 20%, from 1,000 to 1,200 megawatt. The main equipment’s life span has doubled from 30 to 60 years. Besides, the power block complies with the most challenging international standards with regard to nuclear safety.