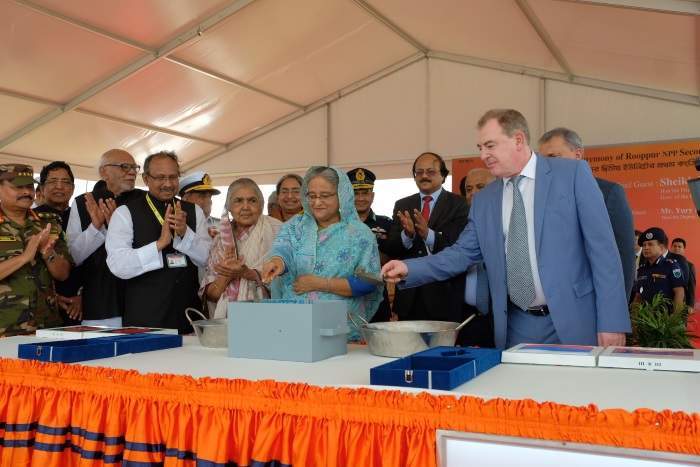 Image: Officials during the First Concrete ceremony of the Rooppur Unit 2. Photo: courtesy of The State Atomic Energy Corporation ROSATOM.

Located in Rooppur village of Ishwardi Upazilla, 160km from Dhaka, the Rooppur plant is being developed with an estimated investment of $12.6bn.

The firm marked the start of the construction of the unit 2 by pouring the first portion of concrete into the foundation base of the reactor building of the unit.

Atomstroyexport, a unit of Russia’s Rosatom, is responsible for the design and construction works of the reactor unit.

Additionally, Rosatom’s various divisions are responsible for the manufacture of reactor vessels, steam generators, pumps, heat-exchange and other equipment.

The power plant is being implemented by the Bangladesh Atomic Energy Commission (BAEC) and is aimed to contribute to the country’s energy security.

The construction of the nuclear power plant is being executed according to the Intergovernmental Russian-Bangladesh agreement signed in 2011.

Construction of unit 1 at Rooppur NPP, which is being supported by International Atomic Energy Agency, has commenced in November 2017.

Each reactor unit has 1,200MW capacity and comprises a reactor and four circulation loops, with each loop including circulation pipelines, a reactor coolant pump, and horizontal steam generator.

The power plant’s main equipment will have more than 60 years of service life without the need for replacement.