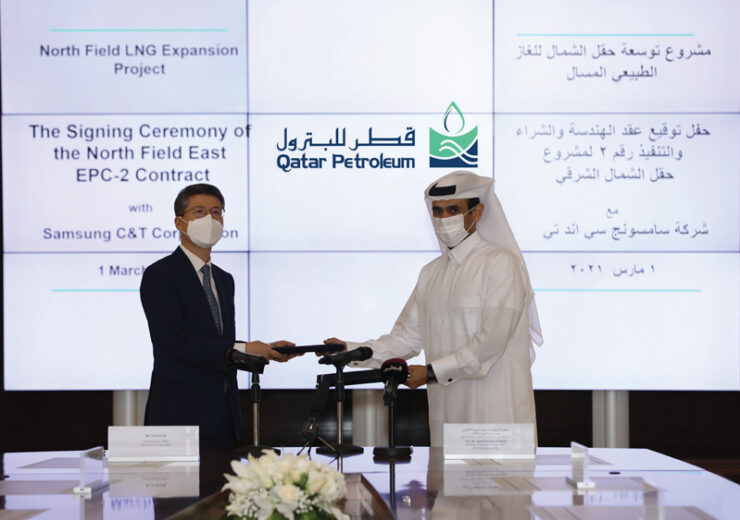 Qatar Petroleum (QP) has awarded an engineering, procurement, and construction (EPC) contract worth over $2bn to Samsung C&T pertaining to the $28.7bn North Field East (NFE) project in Qatar.

The EPC contract is for the expansion of the LNG storage and loading facilities in Ras Laffan Industrial City, which are part of the four-train LNG project.

According to Samsung C&T, the construction period under the contract is from 1 March 2021 to 30 November 2025. The company will be mainly responsible for the construction of three LNG tanks.

Qatar Minister of State for Energy Affairs and Qatar Petroleum president and CEO Saad Sherida Al-Kaabi said: “This contract provides for the expansion of existing infrastructure required to ensure the safe loading and on-time delivery of our LNG cargoes to our international customers across the globe.

“Its scope includes three LNG tanks and three LNG loading berths for NFE, and options for two LNG tanks and one LNG berth for NFS project, and all associated pipes, lines and loading lines.”

The order to Samsung C&T marks the second major onshore EPC contract awarded by Qatar Petroleum for the NFE project.

In early February, Qatar Petroleum awarded an EPC contract to the Chiyoda Technip joint venture. The contract worth more than $1bn is for the construction of four LNG mega-trains and their associated facilities.

The NFE project will have a capacity of 32 million tonnes per annum (Mtpa) with each of the trains having a capacity of 8Mtpa. It is scheduled to begin production in Q4 2025.

According to Qatar Petroleum, the contract for the expansion of the LNG storage and loading facilities marks another key milestone to considerably boost the LNG production capacity of Qatar.

The Qatari company said that the two contracts are a result of front-end engineering and design work that started in early 2018.

The NFE project will grow the country’s LNG production capacity from 77Mtpa to nearly 110Mtpa.

A second phase of the project called the North Field South (NFS) project, will further boost the LNG production capacity of Qatar to 126Mtpa by 2027.