PolyMirae and SK Advanced are all set to form a joint venture to build a new polypropylene plant in South Korea which will have a production capacity of 400,000 ton/year. 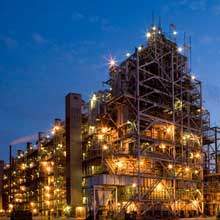 Image: LyondellBasell is a producer of ethylene and propylene oxide among other plastics and chemicals. Photo: courtesy of LyondellBasell Industries Holdings B.V.

While PolyMirae itself is a joint venture created by Daelim and LyondellBasell Industries, SK Advanced is a chemical preparation company.

Their proposed polypropylene plant, which will be built in the southeastern port city of Ulsan, will serve customers across Asia.

Subject to regulatory filings and permitting reviews, the South Korean polypropylene plant is expected to break ground in January 2019 and is slated to begin production in the first half of 2021.

According to LyondellBasell, the plant will be among the largest in its category in Asia and will use its Spheripol technology.

Polypropylene produced at the new joint venture, which will be fit to be used in automotive components, blow molding, injection molding and packaging film, will be sold to customers across South Korea and exported to other parts of Asia.

LyondellBasell said that some of the polypropylene manufactured is planned to be also sold to compounding companies in South Korea and the wider region.

LyondellBasell joint ventures and international marketing vice president James Seward said: “Through direct investment or through a joint venture such as PolyMirae, we continue to build production capacity to serve rapidly growing end markets in Asia.

“With the addition of this joint venture’s capacity, PolyMirae will ensure that automotive manufacturers in South Korea and throughout Asia will continue to be able to locally source the polypropylene they need to advance the next generation of fuel efficient vehicles, and that LyondellBasell will gain access to additional export volumes to ensure our global production footprint will continue to grow alongside our customer base.”

PolyMirae, which is owned 50:50 by Daelim and LyondellBasell, was created in the year 2000 to produce and supply the polypropylene across Asia.

Daelim is a South Korean construction and petrochemical company while the Netherlands-based LyondellBasell is a plastics, chemicals and refining company.