Poland-based start-up flyMETRICS Group Sp.z o.o. , which has developed an innovative unmanned aerial system (UAS) is announcing its first setup for autonomous inspection of wind turbines to be released by the end of 2020. 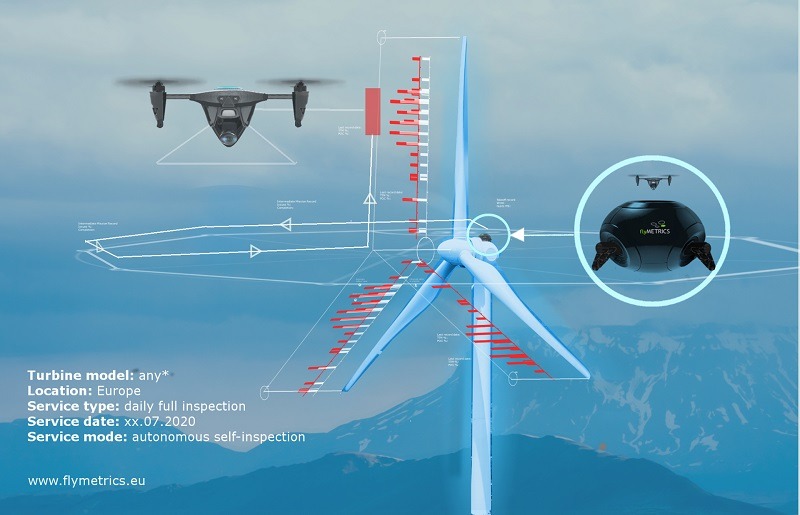 The nest-type UAS carries out given tasks completely autonomously and is remotely controllable. With this innovation, routine wind turbine inspections of all external parts (e.g., rotor blades, which are subject to deterioration) can be conducted automatically, in both visible and infrared modes. The obvious advantages of this setup include the significant reduction of idle times and inspection/maintenance costs, as well as human health risks during inspection.

Wind energy is continuing to grow globally, with a significant share of installations in remote or offshore sites (over 15 GW installed offshore wind capacity in Europe). Inspection and maintenance of wind farms is a leading cost factor for wind farm operators. As Mauro Morana, flyMETRICS’s CEO, commented, “modern wind turbines are high-tech giants, bound to high productivity and exposed to a climate that gets more extreme every year. Human inspection of wind turbines is a burden that must be overcome; we believe self-inspection should be a built-in capability of any wind turbine.”

flyMETRICS’s drone work started in 2014 and was prototyped in 2017 in a general-purpose model called H20-UAS, where H20 stands for 20-h /24-h flying time. This model was enabled by the successful development of an autonomous take-off, precise flight control and landing capabilities, also under harsh weather conditions. Inspection of wind turbines or other assets follows a given schedule.  “Flying and landing a drone reliably in an exposed site for months, in full autonomous mode, is a hard job. It requires a special approach because what we end up with is a ‘life-like’ robotic bird,” Morana said. flyMETRICS plans on releasing first pilot nest-system to be placed on top of wind turbines by the end of 2020.

In 2018, flyMETRICS wind-energy technology (WINDRO) qualified as one of the two winners of the Polish national technology competition INNOSBZ-17, dedicated to innovative drone technologies. INNOSBZ, managed by the Polish National Centre of Research and Development (NCBR), is part of the Smart Growth operational program of the European Union. The achievement, the result of a multi-stage selection process involving a panel of national and international experts, acknowledged the company’s achievements and breakthrough potential, and the grant will boost R&D efforts.

flyMETRICS’s autonomous drone technology is predicted to impact a broad spectrum of industries, from renewable energy to agriculture and mining. Other relevant applications include those related to environmental protection, such as fire detection.