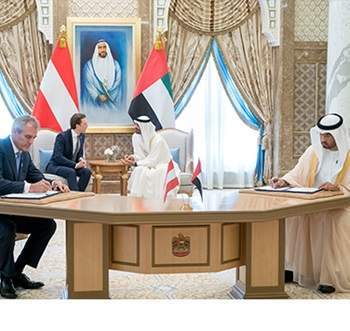 OMV, which is part-owned by a subsidiary of Abu Dhabi’s Mubadala Investment Company, has contributed a participation fee of AED5.5bn ($1.5bn) in the offshore concession comprising SARB (with the satellite fields Bin Nasher and Al Bateel) and Umm Lulu field as well as the associated infrastructure.

Located in shallow waters, 120km away from Abu Dhabi, the SARB field is expected to commence oil production before the end of 2018.

With the deal signed, OMV joins CEPSA, a Spanish integrated oil and gas company, which holds 20% stake in the in the offshore concession. ADNOC plans to retain 60% interest in the concession.

OMV CEO Dr Rainer Seele said: “The offshore concession award is an important milestone in OMV’s delivery on its 2025 strategy, as we expand our footprint in one of the world’s leading oil and gas hubs.”

The concession, however, will be operated by ADNOC Offshore, a subsidiary of ADNOC, on behalf of the concession partners.

ADNOC said that the concession award to OMV strengthens its strategy to maximize returns from its resources, expand its downstream business, and retain value for the UAE.

ADNOC Group CEO Dr Sultan Ahmed Al Jaber said: “This long-term strategic agreement with OMV, as well as the other seven offshore concession agreements we have concluded recently, underscores ADNOC’s commitment to maximizing value from Abu Dhabi’s substantial resources for the benefit of the nation, in line with the leadership’s directives.

“The expansion of the global economy and increasing demand for oil, refined products and petrochemicals, provide us with new opportunities to create value across our upstream and downstream business.

“To seize these opportunities, we will work closely with OMV, and our other partners to further optimize operational efficiencies, enhance performance, and capture future growth opportunities.”

As per the 2030 strategy, ADNOC aims to increase its crude production capacity to 3.5 million bpd by the end of 2018.