OFID – the OPEC Fund for International Development – has signed a $50m public sector loan agreement with Argentina to co-finance the second phase of the Desvío Arijón Water Supply project. 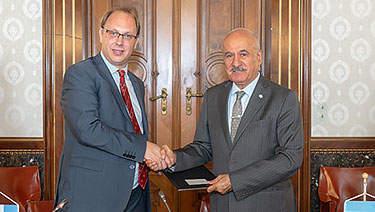 The agreement was signed by OFID Director-General Suleiman J Al-Herbish and Argentina’s Minister of Economy of the Santa Fé Province, Gonzalo Saglione.

Al-Herbish highlighted that this project is in line with Argentina’s National Development Plan 2016-2020 as well as with the Provincial Strategy Plan of Santa Fé, Vision 2030, in which the government of Santa Fé defines access to water as a basic right.

The project is also in line with OFID’s mandate to alleviate poverty and its commitment to continue supporting adequate water infrastructure. Al-Herbish noted that this latest loan will provide 122 km of pipelines to connect the Desvío Arijón water purification plant with the city of Rafaela and surrounding towns, benefitting more than 220,000 people.

On behalf of the Province of Santa Fé, Saglione indicated that this project is crucial for residents, and expressed his appreciation for OFID’s continued support.

All of OFID’s public sector loans to Argentina have targeted the country’s water and sanitation sector, in line with the organization’s strategic focus on the energy-water-food nexus approach to sustainable development. Cumulatively, OFID has approved $150m in public sector lending to Argentina, in addition to $20m through its private sector window.