NGK INSULATORS has secured an order for an NAS (R) battery to be used in an energy storage technology demonstration project to be conducted in Dubai. 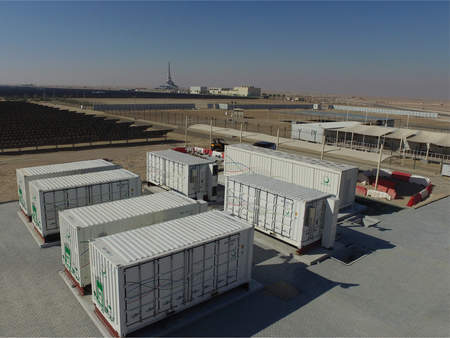 The 1.2MW/7.2MWh NAS battery was ordered last August, installed in March, and will enter full service soon this summer. It was the first installation of a large-scale energy storage system in Dubai.

Dubai has accelerated its investment in renewable energy to eliminate its dependence on fossil fuels. Dubai is building the world’s largest solar park, the Mohammed bin Rashid Al Maktoum Solar Park, in the south of the Emirate.

The Emirate is targeting introduction of 5GW of photovoltaics (PV) and concentrated solar power (CSP) by 2030, which will raise the ratio of renewable energy to 25% of total generation capacity.

In anticipation of the large-scale introduction of renewable energy in the future, the NAS battery system was installed alongside a 13MW PV plant in the solar park.

The NAS battery will be used to stabilize fluctuations in solar power output, plus other grid applications including energy time-shifting and frequency control. The large capacity of the NAS battery makes it ideal for this set of applications.

Overview of the NAS Battery Ordered