Nexans Norway has been selected to supply umbilicals and accessories for the BP-operated $9bn Mad Dog 2 project in the US Gulf of Mexico. 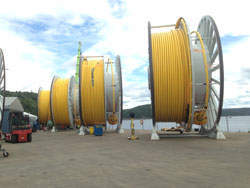 Under the contract, Nexans will supply static and dynamic umbilicals and accessories for the second stage development of the Mad Dog offshore field and will be installed in depths from approximately 1,280m to 2,160m to connect the field to the Floating Production Unit (FPU).

The Mad Dog 2 is a deepwater oil and gas development located in the Southern Green Canyon area of Gulf of Mexico, approximately 320km south of New Orleans, Louisiana.

The Phase 2 involves development of the southern portion of the Mad Dog field, which is located in the Green Canyon region of the Gulf of Mexico.

The work forms part of an existing five-year agreement signed between BP and Nexans for the global supply of umbilical and Direct Electrical Heating (DEH) cables.

Nexans Subsea and Land Systems business group business development manager Winifred Patricia Johansen said: “We are committed to developing long-lasting solutions in a strongly competitive environment and over the years we have delivered many projects together with BP, including projects in the Gulf of Mexico.”

Nexans plans to manufacture the electrical and fiber optic elements at its plant in Rognan, Norway while the umbilicals are planned to be developed, manufactured and tested at Nexans Norway specialised plant in Halden, Norway.

The proposed Mad Dog Phase 2 development involves a new floating production platform with a production capacity of up to 140,000 gross barrels of crude oil per day from up to 14 production wells.

The project is operated by BP with 60.5% stake while other partners include BHP Billiton (23.9%) and Chevron affiliate Union Oil Company of California (15.6%).