AFGHANISTAN’S MINISTRY of water and power has awarded a contract worth US$16.9M to Voith Siemens hydro power generation for the rehabilitation of two of the country’s hydroelectric plants. 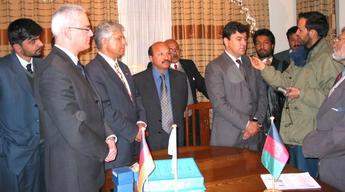 Modernisation work on the Sarobi and Mahipar plants will result in an installed capacity of some 77MW in about 18 months’ time.

Two of the three units at Mahipar are to be partly modernised and repaired with the delivery of electromechanical equipment, assembly and supervision of commissioning, the first stage of which is expected in May 2005.

Finance for the rehabilitation works is to be provided by Germany’s KfW.