Milestones have been reached at the Watts Bar 2 and Vogtle construction projects in the USA. 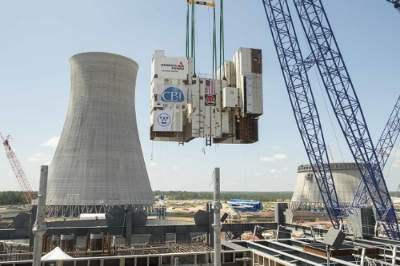 Milestones have been reached at the Watts Bar 2 and Vogtle construction projects in the USA.

The US Tennessee Valley Authority (TVA) has completed eight weeks of key functional testing on unit 2 of the Watts Bar NPP in Spring City, Tennessee. The testing is required to apply for an operating licence from the Nuclear Regulatory Commission before fuel can be loaded into the reactor.

TVA began construction of the 1150 MWe reactor in the 1970s but stopped work in the 1980s due to lower energy demand. Watts Bard 2 will be the first new reactor to enter service in the USA since 1996 when Watts Bar 1 began operation. Construction of Watts Bar 2, a Westinghouse-designed pressurised water reactor (PWR), is now around 99% complete. Additional testing will now begin "focusing on the integrity of primary containment and important safety-related equipment, such as emergency diesel generators," TVA said.

Progress was also reported on unit 3 at Southern Co’s Vogtle NPP in Georgia, with the lifting into place of the 1030t CA01 module into place following its assembly on site. The steel CA01 module will house Vogtle 3’s two steam generators and other equipment. Both steam generators, which were assembled in South Korea, are already at the Georgia site. Two Westinghouse AP1000 reactors are under construction at Vogtle.

Construction of Vogtle 3 began in March 2013 for scheduled start-up in 2019. Vogtle 4, under construction since November 2013, is expected to begin operation by mid-2020. Southern said in January that delays may add more than $700m in costs for the two reactors. Two AP1000s are also under construction at Scana Corp’s VC Summer nuclear plant in South Carolina.