In 2007, a major project was completed to install a micro hydroelectric system at the historical Town Mill on the River Lim in Lyme Regis, Dorset. The electricity produced at the 7kW project is used by Mill itself with the remainder sold into the National Grid. 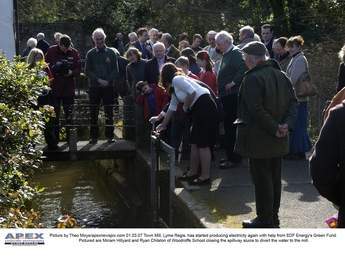 Planning and designing the project

In 2004, in response to the UK Government’s energy policies that encourage electricity generation from renewable resources, the Town Mill Trustees began to investigate using water from the River Lim to produce electricity, whilst still retaining the watermill’s traditional flour-making capability. A feasibility study carried out in 2005 showed that a micro hydroelectric system would be viable and would not affect the waterwheel and flour milling.

Towards the end of 2005 the Town Mill’s Hydro Project Team obtained funding for the project from Clearskies Renewable Energy Grants (part of the DTI), the edf Energy Green Fund and the Town Mill Trust, with the funding used to appoint HydroGeneration Ltd (now part of Segen.co.uk) as the Consultant Engineers to this turnkey project.

The company undertook project feasibility in 2005 and installed the system in 2006/7, with a small team of mill volunteers overseeing the project on behalf of the Town Mill Trustees.

Data on River Lim flow rates at the mill indicated an annual average flow rate of 0.24m3/sec. This flow, combined with modern hydro technology and a head of water of 4.03m suggested that a micro hydroelectric system could produce about 32,000kW annually, with CO2 savings of about 13 tons. The 2005 Feasibility Study also concluded that operating the proposed system would not interfere with the watermill’s primary role of flour milling.

As a result, the hydroelectric system was designed to fit into the disused wheel pit on the outside of the north wall of the mill building, which is a listed structure. This design solution avoided any structural alterations to the listed building. The location also provides easy access to the water supply from the leat (mill stream) and its discharge into the existing tailrace, already in use for the waterwheel.

The mill had originally used the river to produce DC electricity in the 1930s, but the waterwheel had to be taken out to find space for the hydro system. That DC system was removed in 1948 after the National Grid started operating with AC electricity.

The heart of the new system is now an Ossberger cross-flow water turbine, designed specifically for this site, with a maximum power output of 7.07kVA. Its split-flow 300mm rotor, operating at 245rpm (max), is digitally controlled through two actuators to optimise power output whilst maintaining synchronised speed.

The turbine drives a general purpose Brook Crompton 3-phase induction generator. The 4-pole, 50Hz system operates at up to 1500rpm, is rated to 15kW and is modified to match the digital grid connection unit. Digital control is provided by an Excitation and Mains Connection Unit produced by Sustainable Control Systems Ltd.

The fully automatic system operates unmanned round the clock and has an auto cut-out and re-start facility to cope with any unusual conditions in the hydro system itself or in the National Grid.

Although the system was designed to avoid making changes to the mill building, work was required in the chosen location of the old wheelpit area and this involved three major tasks in late 2006:

• Construction of a sump in the tail race for the turbine draft tube.

• Installation of steel supports at the end of the leat and in the tail race to hold the system components in position.

• Opening of the leat end-wall to feed the water tank.

Installation of the water tank started in November 2006. Its design incorporates a 0.5inch spacing metal bar screen to protect the system from river debris and to prevent fish from entering the system.

Next, the water turbine was fitted onto its supporting steelwork, after which the penstock was connected. The induction generator was installed behind the turbine in February 2007 and the pulley and belt drive connected. The digital control system, final electrical connections and metering systems, were the last system parts to be fitted.

Testing of the system started on 12 February. Water was fed to the turbine for the first time on 14 February 2007.

Full system commissioning and trial running of the turbine continued until the system was formally switched on by children from local schools on 1st March 2007.

Although the main aim of the project is to generate electricity, another important aim is to ensure that the system is used as an educational tool for mill visitors, to demonstrate the combination of modern technology and a renewable energy water source in the generation of electricity. Guided tours by experienced volunteer millers are offered at the site.

For further information on the project, please visit www.townmill.org.uk. This project was nominated by the British Hydropower Association (www.british-hydro.org)