China’s Three Gorges project is to receive four 700MW Alstom turbines following the signing of a deal worth over US$198M. 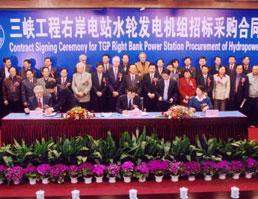 The turbines and associated generators are to be manufactured at the company’s French, Swiss, Brazilian and Chinese factories, with delivery to China slated for 2006 and 2007.

The turbine-generator sets are to be installed at the project’s Right Bank power house, which will eventually comprise 12 units on completion. The contract was awarded by representatives of the Three Gorges International Tendering Co.

In a separate announcement, Hydro-Québec has awarded Alstom a contract to carry out a US$36.5M turbine generator refurbishment project at Canada’s Outardes-4 hydro power plant.

Alstom’s Sorel-Tracy plant near Montreal is currently carrying out design and engineering work on four 188MW turbine-generator sets, with manufacturing scheduled for 2005 and final commissioning expected in December 2008.

The work is to include supply, installation, testing and commissioning of four units and auxiliaries.