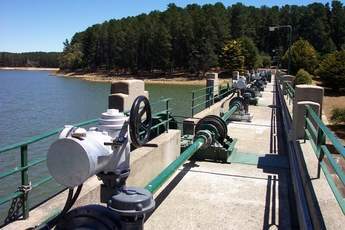 Rotork’s contract involved the replacement of worn out gearboxes and braking mechanisms on ten spillway gates at the reservoir with IQ actuators and Rotork Gears gearboxes.

Owned by Coliban Water, Lauriston reservoir is one of three major storage along the Coliban river, supplying water to 130,000 domestic and business customers. The spillway structure was completed in 1941, with the spillway gates and operating mechanisms installed several years later to enable the controlled release of water during a flood.

The ten gates vary in width from 6.71 to 8.23m. Each gate is 2.76m high and weighs over five tonnes. Before the upgrade each gate was operated by a 1.7 tonne gearbox, requiring 14,800 turns to fully stroke the gate. The gates are wound down to close, originally by hand and later with a portable hydraulic drive. The gates are counterweighted to open so the gearboxes acted only as braking units in this direction.

Maintenance inspections revealed that the gearboxes were in poor condition with worn gears and braking mechanisms. The overhaul costs would be very high. At the same time a risk assessment carried out on the operation of the gates concluded that, in addition to Occupational Health and Safety risks, the gates could not be opened quickly enough to achieve maximum flood capacity and therefore the spillway capacity of the reservoir itself was reduced. A faster more reliable and less physically demanding solution was required.