A tidal barrage across the Severn could contribute to energy and climate objectives, but the Hafren Power scheme has failed to demonstrate economic, environmental and public acceptability, according to MPs on the Energy and Climate Change Select Committee. 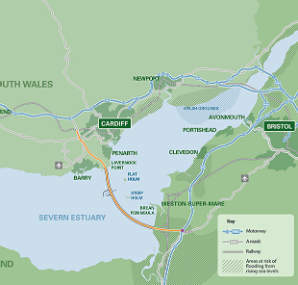 A tidal barrage across the Severn could contribute to energy and climate objectives, but the Hafren Power scheme has failed to demonstrate economic, environmental and public acceptability, according to MPs on the Energy and Climate Change Select Committee.

In a report published today, the Select Committee backs an alternative approach and calls on the Government to establish a new public governance to proactively manage Severn energy resources

“It became clear during the course of this inquiry that more detailed, robust evidence about Hafren Power’s proposal and claims is needed. Our inquiry has brought more information into the public domain and furthered the debate, but we cannot recommend the Hafren Power scheme as currently presented to us," commented Tim Yeo MP, Chairman of the Energy and Climate Change Committee.

"We are not convinced that the economic case for the proposed barrage is strong enough. Hafren Power’s proposal is likely to require a very high level of support over many years through Contracts for Difference. We do not believe at this stage that the barrage would be competitive with other low-carbon technologies."

The report suggests that Hafren power have failed to answer the serious environmental concerns about a potential barrage adequately. It says far more detail and evidence is needed before the project could be regarded as environmentally acceptable. The report further suggests that the Government should consider whether a smaller tidal facility would be a better option for the region.

The proposal from Hafren Power Ltd is for an 18km fixed tidal barrage across the Severn estuary between Brean in England and Lavernock Point in Wales. It would have 1,026 very-low-head (VLH) bi-directional turbines, generating approximately 16.5 TWh/year on both ebb and flood tides.

Renewable energy experts Regen SW who submitted evidence to the committee have welcomed the report, with Regen SW director Johnny Gowdy stating: "The committee report has endorsed the views held by us, and many people both in the industry and environmental organisations, that the barrage is not the answer and we must find another way to harness the energy of the Bristol Channel to generate clean energy and jobs."

Hafren Power however has vowed to address environmental issues and encourages the government to support the project.

“The report is unhelpful and frustrating – we all know we have a lot more work to do and we will do it," said Tony Pryor, Chief Executive. "The Government has already told us it is not against the barrage and we are determined to press ministers and officials to engage fully. We believe the environmental and economic issues can be solved with everyone working together.

“Unlike smaller schemes, only a barrage can harness the full power potential of the estuary and do it economically. It will also be much cheaper and last much longer than offshore wind farms which have high levels of public subsidy.

“Britain needs more infrastructure projects, especially power generation. Our proposal delivers in spades – up to £25 billion in private investment, 20,000 construction jobs and a further 30,000 jobs supported, and the cheapest zero carbon electricity over its lifetime."