The second lifting of the eastern part of the arch that will form the Chernobyl new safe confinement has started. 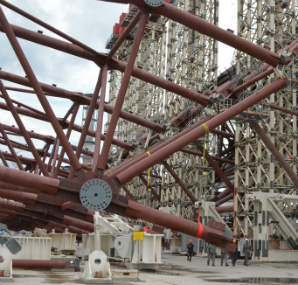 The second lifting of the eastern part of the arch that will form the Chernobyl new safe confinement has started.

The lifting operations follow a complete inspection of the steel arch constructions, operability of jacking system and geodesic surveying of arch metal constructions position and foundations on 11 June.

The EUR-1 billion construction of the new safe confinement is being sponsored by several countries and will be supervised by the European Bank for Reconstruction and Development. The roof itself is more on the scale of a bridge than a building; when complete it will span 257m, and measure 164m across by 110m high. The first part of the eastern arch segment, weighing 5300 tons was lifted into place in November 2012. The third and final section of the eastern segment is scheduled to be lifted at the end of 2013. The new safe confinement is expected to be completed by October 2015.

Photo: Assembly of the metal arch structure on 6 June.