Energiedienst AG has awarded a consortium led by Voith Siemens Hydro Power Generation a contract to supply turbines and generators for the Rheinfelden hydro power project. Partner within the consortium is Alstom Hydro (Switzerland) AG. 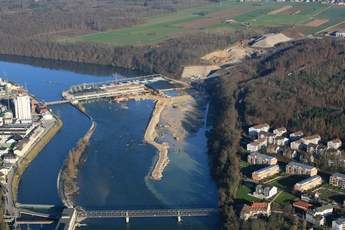 The scope of supply includes four Kaplan bulb turbines with a capacity of 25MW each, and the related generators, together with a smaller mandatory release unit and a number of supplementary systems. The new complex to be built for Rheinfelden is the largest investment in renewable energies in Germany these days.

With a total of 100MW of installed capacity, the performance of the newly-built plant will be four times as high as the current plant capacity. Average annual production will be raised from 185MkWh to 600MkWh, which equals the demand of approximately 165,000 households. The new units are scheduled to start operation in 2010.

The Rheinfelden hydro power plant is located on the Rhine River that marks the border between Switzerland and Germany. The plant was the first big hydroelectric power plant in Europe’s history of energy generation.