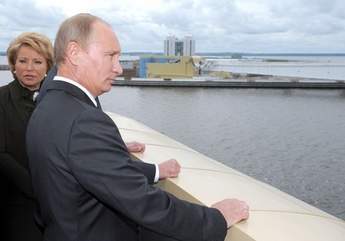 The multi-million dollar project – also known as St Petersburg Dam – is designed to protect Saint Petersburg from storm surges by separating the Neva Bay from the rest of the Gulf of Finland.

The project was originally launched back in 1979, but was abandoned as too costly when the dam was almost 70% complete following the 1991 Communist collapse. The project was revived in 2005 by Putin, with construction work starting again in 2006.

The project consists of a 25km dam, six discharge sluices and two navigation channels. The main channel is 200m wide and will be sealed using two 130m curved doors.

Speaking at the inauguration ceremony, Prime Minister Putin said: “Today we celebrate here an undeniably historic event. Today we have completed the construction of a flood control complex in St Petersburg. Now that it has been completed, the city will not only be protected from a reoccurring nightmare, flooding, the environmental situation will also improve, since the remaining part of the city ring road will run along the levee.”

Putin toured the flood control command center where dispatchers monitor the system’s operations. The environmental state of the water surrounding the flood control complex is monitored by more than 30 water purification systems that make sure that runoff from nearby roofs and roads does not flow into the channel.

He also visited the observation platform and inspected the complex’s locking mechanisms. One such mechanism weighs 3,000 tonnes; together with its frame and joint it weighs a total of 5,000 tonnes. Upon his inspection of the mechanisms, the prime minister noted: “An impressive structure. Worthy of St Petersburg. There is a technological beauty to it.”

Vladimir Putin at the opening ceremony of St Petersburg flood control complex. Courtesy of the Government of the Russian Federation