Praise and criticism for TEPCO three years after Fukushima

In a speech to the Foreign Press Centre on 11 March, Dale Klein, chairman of TEPCO's Nuclear Reform Monitoring Committee, and former chairman of the US nuclear regulator, said that he is optimistic about Japan's nuclear future, partly because of changes he has seen at TEPCO, but also because of the recognition among people in Japan that nuclear power must remain part of Japan's future 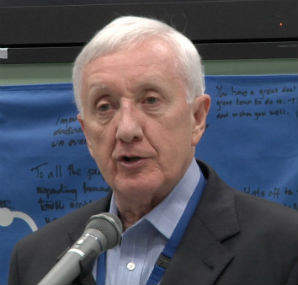 In a speech to the Foreign Press Centre on 11 March, Dale Klein, chairman of TEPCO’s Nuclear Reform Monitoring Committee, and former chairman of the US nuclear regulator, said that he is optimistic about Japan’s nuclear future, partly because of changes he has seen at TEPCO, but also because of the recognition among people in Japan that nuclear power must remain part of Japan’s future.

He also said that he is pleased about the strides that TEPCO is making in developing safety culture following the accident.

"TEPCO is making substantial progress toward the creation of this culture. It doesn’t happen overnight, and old habits can be hard to overcome."

"TEPCO is making substantial progress toward the creation of this culture. It doesn’t happen overnight, and old habits can be hard to overcome. But I believe TEPCO’s leadership is committed to making it happen, and that they understand the necessity of succeeding. I am encouraged by the fact that their Nuclear Reform Plan incorporates extensive changes in management structure as well as training and communications, all with the focus on establishing this safety culture. And I believe we have seen it play out in the meticulous planning for and execution of the fuel removal from Unit 4, despite the dire predictions that so many had made about how it would turn out."

However, he was critical about the plans for stored contaminated water on site. "…they are making progress, though not yet enough, on the long-term challenge posed by groundwater. I remain concerned about the technical talent to manage the water issues and the lack of a long-term plan for the disposition of the filtered water currently stored in the tanks at Fukushima. Of all of the many issues facing us, this is perhaps the simplest to solve but creates the most public anxiety.

On the subject of the contaminated water, a Japanese expert task force presented options for dealing with tritium contained in contaminated water, which cannot be removed by the current treatment system, according to a 10 March report from Japan Atomic Industry Forum’s Atoms In Japan news service.

Klein continued, "With all the recent focus on the management of contaminated water, and the day-to-day ups and downs of water leaks, there is a tendency to divert attention – and resources – from addressing and solving the main challenge posed at Fukushima: How do we keep the molten fuel and the spent fuel cooled and how do we safely remove molten fuel from damaged containment vessels? As most of you know, removing the kind of molten fuel that exists at Fukushima Daiichi has never been done before. At Three Mile Island, the fuel melted but the containment vessel was not breached."

In February, TEPCO reiterated its plans to remove fuel assemblies and fuel debris from the damaged units, which contain most of the radioactivity, and hence the hazard, of the site. Fuel removal began at unit 4 in November 2013; as of 10 March 462 out of 1533 fuel assemblies had been transferred.

The earliest possible removal of fuel debris is 2020, for units 1&2, with unit 3 about a year later, in a process likely to last about 20 years. TEPCO said that it considers that the most reliable way to remove fuel debris is underwater, in a nine-step process:

However, unlike Three Mile Island 2, which also suffered a meltdown, the reactor buildings of units 1, 3 and 4 are damaged; the units 1, 2 and 3 RPV and/or PCVs have been damaged; fuel debris has possibly fallen out of the RPV, and the structure of the bottom of the vessel is complicated by having control rod drive mechanisms.

Prime Minister Shinzo Abe spoke on the eve of the third anniversary of Great East Japan Earthquake, discussing the progress made in reconstruction efforts, not just at Fukushima Daiichi but in surrounding areas affected by the earthquake and tsunami.

He said that this year, agriculture can resume on 70% of farmland affected by the disaster, although it is unclear which disaster he is referring to. "In the town of Hirono in Fukushima Prefecture, in front of rice fields which had been planted for the first time in three years, farmers told me of their joy at being able to resume farming. Activities such as pulling weeds, maintaining the paths between rice fields, and retaining proper water levels have been recognized as techniques to ensure a rich harvest. These have come to be called ‘nariwai’ over the ages, a word that now also means ‘one’s occupation or livelihood.’"

"The evacuation order for the city of Tamura, in Fukushima prefecture, will be lifted on 1 April so that residents can return."

He announced that the evacuation order for the city of Tamura, in Fukushima prefecture, will be lifted on 1 April so that residents can return. He promised that they would have access to specialist radiation advice: "For those who desire it, we will conduct detailed supervision and analysis of the quantity of radiation to which they have been exposed and enable them to receive thorough explanations from specialists."

Abe went on to say that, based on work to decommission Fukushima Daiichi and deal with the contaminated water issue, ‘with the national government standing at the fore’, "we will aim to lift the evacuation directive and move forward on decontamination and on restoring infrastructure, not only in the city of Tamura but also in other municipalities, in order to respond to the feelings of those who wish to return to their hometowns at an early time." He said that compensation procedures will launch in April for those who have moved away.

"Without the reconstruction of Fukushima Prefecture there can be no revival of Japan," Abe said.