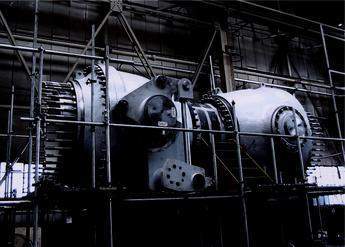 The Bahrain Ministry of Finance and National Economy is seeking expressions of interest for construction of a $1.15 billion 1000 MWe IPP to be built in two phases on reclaimed land at the Hidd complex. Phase 1, consisting of 400 MWe, is due to come on stream by 2006. Phase 2, consisting of a further 600 MWe is due for operation by 2008.

The Bahrain government will sign a 20-year offtake agreement with the IPP operator.

• Bolivian Pan American and Brazilian Furnas are currently discussing the construction of a 2000 MWe thermal station in Porto Suarez, Bolivia and a

The Bulgarian Ministry of Environment and Water has started prequalification for a r80 million project to deliver, install, test and commission FGD systems using the wet limestone slurry process for Maritsa 5 and 6. The project also includes civil works and infrastructure development. Start-up is scheduled for 2007.

Nai Kun Wind Development is seeking to develop a 350-turbine 700 MWe offshore wind farm off the coast of British Columbia near Queen Charlotte Island. The project is valued at $1150 million and is scheduled to start operation in 2007. Construction is expected to start in late 2005.

• The TransAlta subsidiary Vision Quest Windelectric has started construction work on the $74 million 68 MWe Summerview windfarm at Pincher Creek in Alberta, which will consist of 38 Vestas V80 wind turbines. Startup is scheduled for July 2004.

Campanario Generacion, a subsidiary of Innogy, is studying the viability of a proposed $200 million 370 MWe combined cycle power plant. Open-cycle operation is due to start by the end of 2005, and closed-cycle operation by early 2006. The plant would be supplied by 1.7 million m3 of gas a day from Argentina. Campanario Generacion is currently talking to three potential investors.

• Shell Solar has won a r2.7 million contract from the Chinese government to supply solar electricity to remote areas in southwestern and northwestern China. Shell Solar will install centralised systems in villages in Yunnan province and Xinjiang Uygur Autonomous Region during 2004. The contract is for the pilot phase of China’s Brightness programme that aims to cover remote villages throughout China.

Energia Molise plans to build a u725 million 800 MWe combined cycle power plant at Termoli in the Molise region of Italy. The plant is due to start operation by April 2006.

The plant will comprise two GE 9FA gas turbines, two heat recovery steam generators and one steam turbine. The EPC contract has gone to a consortium of VA Tech and Technip.

The Comision Federal de Electrtcidad (CFE) is accepting bids for a $150 million 220 MWe combined cycle power plant with an optional 20 MWe solar power plant, to be located at San Luis Rio Colorado in Sonora state. CFE will buy power from the plant under a 25-year power purchase agreement. The deadline for bids is June 2004. To date, 17 firms have registered bids.

250 MWe offshore wind farm to be located at Slupsk Shoals in the Baltic Sea. The wind farm would consist of 100 turbines. The feasibility study is due to be completed by August 2004. Project start-up is scheduled for 2007.

• AK Heavy Engineering, formerly the Manufacturing division of Kværner Engineering & Construction, has won a £2.5 million contract to replace and refurbish two 100 MWe turbines at the Cruachan hydropower plant in Scotland. It is also building two new 60t 1700mm diameter main inlet valves and refurbishing two existing units, which all feed stored water to the turbines. This contract is part of a £18.5 million plant upgrade recently announced by the owners ScottishPower. The upgrade will result in the boosting of peak power at the plant by 20%.

1 and 2, and fabricating new main inlet valves to units 1 and 2.

Western Bio-Energy has applied for planning permission to build a £20 million 10 MWe wood-fired power plant to be built at Port Talbot in Wales. The plant is expected to use up to 100 000t of wood per year, mostly sourced from the Margam Forest area. The project is scheduled to start up in 2006.

Valleys Energy has applied for planning permission to build a £370 million 460 MWe IGCC power plant at Onllwyn in Wales that will use locally-mined coal to produce hydrogen via a gasification cycle. A decision on the planning application is expected in summer 2004, with start-up scheduled for 2007. Potential EPC contractors are being considered, with a decision expected by the end of 2004. At present, it is thought that Stone & Webster, Fluor, and Jacobs Engineering are bidding for the EPC contract.

Hannahville Indian Community in Michigan is seeking regulatory approval from the federal government for a $1000 million complex consisting of four 250 MWe coal-fired power plants. The complex will have an associated ethanol plant. Construction of the project is not expected to start until 2005.

Florida Power and Light is seeking US government approval for a $600 million project to add 1100 MWe of gas-fired plant to the existing nuclear plant. Completion of the plant expansion is scheduled for 2007.

The American Transmission Company is seeking government approval for a 220 mile 345 kV transmission line running from Duluth, Minnesota to Wausau, Wisconsin. The project is valued at $420 million, with construction scheduled for early 2004, and start-up scheduled for 2008. A permit from the National Park Service to cross the Namekagon River is still pending; the Department of Natural Resources has not yet issued necessary permits. Contact Pete Holtz, Project Manager, N19 W2399, 3 Ridgeview Parkway, West Waukesha, WI 53187. Tel: +1 (262) 506 6874, Fax: (262)506 6704, email: pholtz@atcllc.com.

Sudan
This item not published in the magazine.
• Mott MacDonald is the technical consultant to the National Electricity Corporation of Sudan for the construction of a $230 million 220 MWe oil-fired power plant comprising two 110 MWe units. The plant will be built on the existing site of North Khartoum. The project is scheduled to start up in 2005.

Belgium
This item not published in the magazine.
• Siemens has won a E230 million contract to construct a new turnkey combined cycle power plant at the BASF chemical plant in Antwerp. The contract was awarded by Zandvliet Power, a joint venture of RWE Power, Essen and Electrabel. The plant is scheduled to start operation in August 2005.

UAE
This item not published in the magazine.
• The Union Water and Electricity Company (UWEC) has invited international power developers to submit by 1 February expressions of interest for taking an equity stake in its power and water desalination and transmission project at Qidfa in Fujairah. The first phase of the project will have the capacity to produce 656MWe and 100 million gallons/day of potable water. The second phase, currently in the feasibility stage, will involve the addition of up to 1000 MWe and 100 mg/d. UWEC general manager, Ibrahim Al Ansari, said: “We intend to finalise the first phase process by the third quarter of 2004 so that we can start construction work on the second phase.”

UK
This item not published in the magazine.
• VA Tech Transmission & Distribution has won a 14 million euros project from the UK’s National Grid Company to extend the 400 kV substation at Bolney in West Sussex. VA Tech will supply several bays of 400kV and 132kV AIS switchgear. Work is due to start straight away on the contract, with completion scheduled to take place in stages up until final completion in 2006.