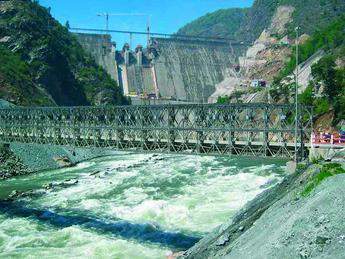 The inauguration ceremony on 27 September 2004 marked the end of a long-running conflict between Endesa, owner of the power plant, and environmental and indigenous activists, who claimed the operation of the dam would flood ancestral Pehuenche indigenous territory and cause the loss of the biodiversity of the Biobío basin. The dispute lead to numerous interruptions of the work

The campaign against the dam, led by two elderly sisters of Pehuenche origin, only ended last September, when the last four families opposing the project signed an agreement with the energy company and finally agreed to leave their houses. Overall, Endesa spent US$30M in social and environmental compensation packages in order to finish the project.

Ralco is the largest hydro plant in the country’s central grid (SIC), meeting 9% of total demand. The plant increases Endesa’s stake in total installed capacity to 51% from 47%, and boosts hydro generation’s share to 60% from 56%.

At the inauguration ceremony, Endesa called on the Chilean government to provide support and the appropriate legal conditions for more hydro projects.