Ontario rules out new nuclear, but commits to refurbishments

The government of Ontario has ruled out the prospects for new nuclear power plants, reasoning that the province does not need additional capacity to meet electricity demands. However the government said it remains committed to refurbishments at the existing Darlington and Bruce nuclear sites. 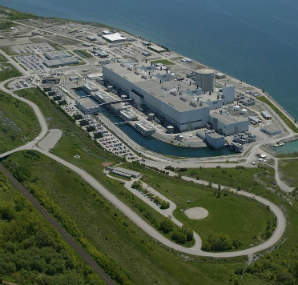 The government of Ontario has ruled out the prospects for new nuclear power plants, reasoning that the province does not need additional capacity to meet electricity demands. However the government said it remains committed to refurbishments at the existing Darlington and Bruce nuclear sites.

"New nuclear will not be part of the long-term energy plan," energy minister Bob Chiarelli told reporters on 10 October.

"We’re in a comfortable (electricity generation) surplus position at this time and it’s not advisable to make the major investments in new nuclear," he said, according to reports in the Toronto Star.

Ontario’s long-term energy plan, which was published in 2010, had envisaged the construction of a new 2000 MW nuclear station at Darlington, as well as the refurbishment of 10 GW of nuclear capacity at Bruce and Darlington. However, a review of the plan was launched in July to see if plans could be delayed.

In July, Ontario Power Generation received detailed cost estimates, schedules and plans for the proposed Darlington units from two vendors – Westinghouse for its AP1000 and Candu Energy for its EC6 design. The government said the plans would be reviewed to "help determine the preferred option for base load generation." Ultimately the decision of whether or not to proceed with a new nuclear plant at Darlington rests with the government whose long-term energy plan is expected to be finalized before the end of 2013.

"While recognizing decisions on timing and logistics are not ours to make, I know that should new-build go forward one day, OPG will be ready," said OPG president and CEO, Tom Mitchell in an emailed message to employees seen by NEI magazine. OPG has not issued a public statement on the decision, and could not be reached for comment.

In more positive news, Chiarelli said the government remains committed to refurbishing the Ontario’s existing nuclear stations. The LTEP had included proposals for the refurbishment of 10 GW of nuclear capacity at Bruce and Darlington.

Bruce Power welcomed the announcement and said that the LTEP, due to be finalized this autumn, would "provide more context" including on the timing and approach to the refurbishments. Bruce recently completed refurbishment of units 1&2 at Bruce A, which returned to power in the autumn of 2012 after 17 years out of service. Refurbishment of the remaining six units at the site needs to be considered within the LTEP, the government said.

OPG plans to refurbish four units at its Darlington Nuclear Generating Station starting in 2016. The announcement that new-build will not go ahead at that site makes the refurbishment of Darlington "more important than ever," CEO Tom Mitchell said in the internal email. A detailed cost projection for the Darlington refurbishment is expected in 2015.

Eighteen units at the Bruce, Darlington and Pickering sites, currently account for over half of the electricity generated in Ontario (53% in 2012). This figure would fall to 46% by 2030 under the long-term energy plan, which projects the operation of the Pickering units until 2020, subject to licensing by the Canadian nuclear regulator.