The Nuclear Regulatory Commission (NRC) has updated the list of actions that the Omaha Public Power District must take before restarting its Fort Calhoun nuclear plant in Nebraska. The facility has been offline since April 2011. 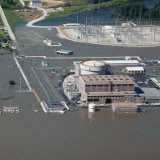 The new CAL items include a requirement to address safety system functional failures, containment internal structure issues, and the use of Teflon as a sealant on electrical cables inside containment, NRC said.

More specifically, NRC has asked OPPD to identify the causes and resolve issues that led to numerous safety system functional failures (SSFF), including the June 2011 electrical switchgear fire that disrupted power to vital systems and components needed for the safe shutdown of the plant.

OPPD must also address two separate containment issues. Some of the containment structure supporting equipment has been found not to meet all design requirements. Also, the insulation material on over 600 pipes housing electrical cables "is known to degrade under some accident scenarios involving high radiation exposure."