The McLeod Green Energy Project is located on the Moira River in Belleville, Ontario. It was constructed in 2007/08 on a flood control dam owned and operated by Quinte Conservation and can generate up to 950kW of electricity. The headpond created by the dam forms a narrow impoundment that stays within the river banks creating a maximum head of 5.2m. This is a run-of-river scheme that was developed by Quinte Conservation with the design assistance of Hatch Energy. 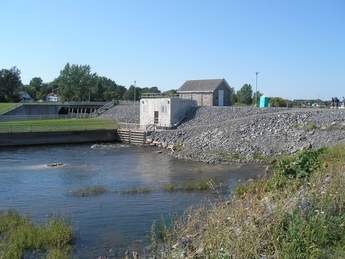 Quinte Conservation is a conservation authority that is run by a board of directors from 18 member municipalities. It is a non-profit agency that provides many environmental programs to the public, owns over 30,000 acres of land, and operates 40 dams. This project was conceived to locally demonstrate green energy and reduce greenhouse gas emissions.

Quinte Conservation wanted this project to be a net gain for the environment in several ways. The headpond regulation is anticipated to be a benefit to fish habitat by providing stable water levels. As a green energy project it would have obvious emission reductions. By tying into the distribution system it would also provide energy that would be used locally and reduce losses from transmission lines that are already nearing capacity. Since Quinte Conservation is an environmental agency, the revenues from the project will be put into local environmental programs that will increase the spinoff effect.

The dam is an embankment type structure with a steel sheetpile core. Two 3m x 3m concrete gated culverts permitted low flows through the embankment section. At the west side a 36m wide sluiceway passes major flows. Modifications were made to the dam to install a 3.25m high Obermeyer gate within the sluiceway to control the headpond level. Two double regulated Kaplan turbines were added to the low flow structure and a control room was constructed within the embankment. The turbines were built by Canadian Hydro Components in Almonte, Ontario and were paired to 475kW synchronous generators.

The installation of the turbines was the most difficult of all the work and presented the greatest technical challenge. It involved the construction of a small cofferdam to dry the work area around the culverts so that the bottoms could be lowered by 2m to optimize turbine placement. The riverbed is shaley limestone and there was significant leakage into the work area. Large diesel pumps were needed to dewater the work area. This work proceeded through the winter making the work even more difficult as frigid weather compounded pump failures.

H.R. Doornekamp Construction Ltd. from Odessa, Ontario was the selected as the general contractor. The company had extensive experience placing concrete in and around water, but had never completed a hydro power project. After more than one year of construction and a lot of teamwork between designers, suppliers, owner and contractor, the project was successfully completed in the fall of 2008 making this one of the first new hydro power projects in Ontario in over 15 years.

Construction work on the project