itmsoil has won a contract worth UK£190,000 to supply specialist equipment to allow remote monitoring of data recorded at Roseires Dam in Sudan. 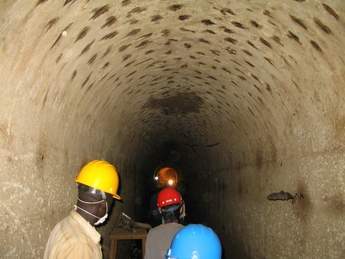 The company, which is based at Uckfield in East Sussex, UK, has already installed a variety of sensors at the dam on the Blue Nile during a project to raise its height.

They include: magnetic extensometers used to monitor settlement and heave of soft ground while embankments are extended; piezometers designed for accurate and long-term measurement of water pressures; load cells monitoring the amount of load in bars tying together new sections of the buttress dam to the existing wall; and sister bar strain gauges which measure strain in the concrete.

The final part of the project is to install dataloggers allowing the instruments to be read automatically and the data to be recovered remotely.

itmsoil project manager Rob King-Mason said the water level at the dam has been lowered while the work is completed and the dam is due to be commissioned at the end of May.

The multi-purpose Roseires Dam was completed in 1966 but sedimentation reduced the water capacity of the reservoir and so work began again in 2009 to add ten metres to the height of the concrete buttress dam and the embankments either side.

When completed the concrete section will be 78m high. The earth dams will be 40m high and extended outwards from 12.5km to 24.1km. The storage capacity will be increased from 3Bm3 to 7.4Bm3.

Mr King-Mason said: “We are very pleased to have won this contract which consolidates the work we have done so far at the Roseires Dam,” said King-Mason. “Our instrumentation is installed in many dams across the globe in places such as Pakistan, Morocco, Iran, Thailand, Singapore, Vietnam and Greece