A recent project to map and assess hydrokinetic resources in rivers of the continental US has found that these undeveloped resources could provide 3% of the nation’s annual use of electricity, the Electric Power Research Institute (EPRI) has announced. 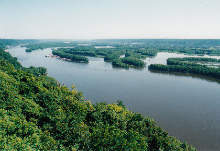 The assessment is part of an effort by the US Department of Energy to characterize US hydrokinetic waterpower resources including river, wave, tidal, ocean thermal, and ocean current. EPRI completed an ocean wave energy mapping and assessment in 2011.

The assessment analyzed 71,398 river segments across the 48 contiguous states and additional river segments in Alaska. It yielded a total theoretical resource estimate of 1381TWh/yr for the continental US, which is equivalent to approximately 25% of annual US electricity consumption.

Paul Jacobson, project manager for EPRI’s waterpower research, said, "The theoretical estimate provides perspective on the magnitude of river resources in the United States. We then broke that number down further to a technically recoverable estimate because there are constraints to developing the resource."

Jacobson also noted that these assessments are a major improvement over estimates for hydrokinetic waterpower resources EPRI completed in 2007, noting that better data and analytical tools are now available that provide a more accurate picture of these resources.