With a string of gas-fired plants being developed in Mexico, can hydro still maintain its place in the country's power generation mix? Neil Ford investigates 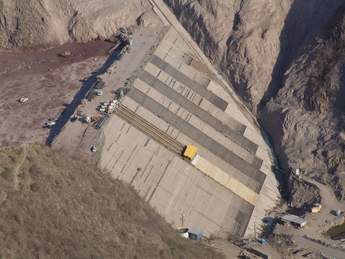 Rising residential and industrial consumption of electricity has prompted something of a dash for gas in Mexico. A string of gas fired power plants have been developed and others are under construction, in a process that seems destined on paper to sideline the place of the country’s hydro sector. Yet the expansion of the Manuel Moreno Torres hydro scheme in Chiapas and the development of the El Cajón facility in Nayarit indicates that the most important player in the power sector, state owned Comision Federal de Electricidad (CFE), is far from ignoring the country’s hydro potential.

The most important addition to the Mexican hydro sector will come from the 750MW El Cajón hydro scheme, which is currently under construction. It is being developed relatively quickly for CFE: construction work began in 2003 and the entire project is expected to be brought on stream in 2007. Following a government tender in 2002, construction work is being carried out by the Constructora Internacional de Infraestructura consortium, which is led by Mexican engineering firm Ingenieros Civiles Asociados (ICA). Total development costs have been put at US$800M, including the installation of the two 375MW turbines.

El Cajón is part of the wider Santiago hydroelectric project and is located 200km north-west of Guadalajara in the regions of Santa Maria del Oro and Yesca in Nayarit state. Phase 1 of the project has already been completed and it is likely that phase 2 – incorporating two diversion tunnels, of 700m and 800m in length respectively, plus a shorter relief tunnel – will be in place by next year. ICA hopes that the first turbine will be brought on stream in February and the second two months later. Apart from the additional capacity provided by El Cajón itself, changes in the water flow of the Santiago river should boost production on the Aguamilpa hydro scheme.

Manuel Moreno Torres makes a significant contribution to national generating capacity, which stood at 45.9GW at the end of 2004. Out of this, independent power producers (IPPs) manage 9.2GW, automotive producers about 3.8GW and co-generators a further 1.5GW. Hydro schemes accounted for 9% of all electricity production in 2004, with thermal plants contributing 83%, nuclear 5% and renewables 3%. Despite the construction of so many gas fired plants, the hydro sector’s share of production is likely to increase in the short term, between now and 2010, because of the installation of new capacity at El Cajón.

With the exception of the 8MW Corporacíón Mexicana de Hidroelectricidad plant in Trojes, CFE controls all hydro schemes in the country with capacity in excess of 5MW. On most hydro schemes, the company works alongside the national body responsible for water supply, the Comision Nacional del Agua. Increased investment in small hydro may slightly erode this de facto monopoly but the state owned firm is likely to continue to dominate the sector as a whole. Indeed, although the generating sector was opened up to competition in 1992, CFE continues to control about 70% of all installed generating capacity. The state owned company’s dominant position in the power sector is also reinforced by its monopoly on power transmission and distribution outside the main cities.

President Vicente Fox said that growing demand for electricity will prompt reform of all aspects of the power sector, including hydro. He commented that higher demand ‘makes an integral and efficient reform of the power sector necessary to provide legal certainty to all participants and allow sustainable development and competition to guarantee energy supplies’. However, despite the government’s policy of encouraging competition in generation, the main power sector regulator, Comision Reguladora de Energia (CRE), seems unlikely to press for the break up of CFE’s hydroelectric assets.

Renewed enthusiasm for developing new generating capacity has emerged because of more rapid growth in the Mexican economy. Several years of weak economic growth up to 2003 dampened demand for electricity but GDP rose by 4.4% in 2004 and 3.6% in 2005 on the back of both higher growth in the neighbouring US and strong oil prices. The government predicts that growth will remain relatively strong for the foreseeable future. Given the close relationship between the rate of economic growth and electricity consumption, power demand is certain to rise more rapidly and so the government has given CFE the go ahead to step up the pace of new plant development.

According to forecasts from the Ministry of Energy (Sener), electricity consumption will increase by an average of 6% a year over the next decade because of rising residential consumption and also because of the continued development of factories along the border with the US that are dedicated to producing goods for the US market. However, consumption will also rise rapidly on the Yucatan Peninsula because of tourist sector growth. In order to ensure secure supplies, Mexico will require 28GW of new generating capacity before 2015.

A Sener report that was published in June revealed that the sector will require investment of US$44.5B before 2014 from a combination of both state and private sector sources. Generating capacity is expected to reach 64,649MW by 2014. If all the planned hydro schemes are actually developed on schedule, it is possible that the hydro sector could maintain its share of the generation mix over the next ten or 15 years but it is unlikely to extend it. Funding for Mexico’s hydro projects has generally come from the public purse. Apart from the small Trojes scheme, the government and CFE have financed all ventures, often with external support. For instance, the World Bank approved a US$460M loan to finance the construction of the Aguamilpa and Zimapan schemes in 1989.

Hydro’s place in the generation mix

Looking ahead, the main question centres on how much investment will be made in non-thermal power plants, as there seems little doubt that gas fired facilities will lead the way. Unlike in many similar economies, oil is still a more important power sector feedstock than gas in Mexico. However, CFE and the government were already committed to switching most thermal plants over to gas before the high oil prices of the past three years, so this process is likely to be speeded up.

Almost all existing private sector generators already run on gas. Companies such as InterGen, Sempra Energy, Transalta and Union Fenosa have set up IPPs in the country over the past three years and 3000MW of new capacity was brought on stream in 2003 alone. Beyond the hydro and thermal power sectors, CFE operates the country’s only commercial nuclear plant, the 1400MW Laguna Verde facility in Veracruz. Other contributors to the generation mix are the country’s seven geothermal plants, with combined generating capacity of 960MW, and a growing number of small wind power schemes.

A large proportion of the investment that is being made into transmission infrastructure is being dedicated to strengthening cross-border links. Mexico already trades in electricity with the US and generally exports more power than its imports. Some power plants have been built close to the US border precisely in order to target the US market but it is unlikely that any hydro schemes would be developed for this purpose. However, the option of exporting electricity from hydroelectric projects could help to ensure the economic viability of any proposed ventures. In the longer term, Mexico is expected to become part of the Sistema de Interconexion Electrica Para America Central (SIEPAC) through new interconnectors with Belize and Guatemala.

Plans to develop hydro schemes in the Usumacinta Basin along the border with Guatemala have been highly contentious. The Boca del Cerro scheme in Chiapas State was originally designed to be the biggest hydro scheme in the region with generating capacity of 4200MW. However, it has been repeatedly downgraded, cancelled and then reconsidered. The fate of the river basin has become a cause célèbre among environmental groups, who fear that flooding up to 800km2 of Guatemalan territory would have a major impact on the regional environment. As a result, the future of hydro developments on the Usumacinta river remains uncertain. Other projects at various stages of planning include La Parota, Copainalà, Quetzalli, Huixtan I, Huixtan II, Jattza, Nance, and Salto de Agua.

The next big hydro project on the horizon is likely to be the 900MW La Parota scheme, on the Papagayo river in the state of Guerrero in the southwest of the country. Scheduled for completion in 2012, it is being developed to export electricity to the rest of Central America, as well as to supply power to the tourist industry around Acapulco. Construction costs are estimated at US$1.4B. However, here again people living in the area due to be flooded have campaigned strongly against of the construction of the dam and development work has already been delayed.

Opponents of the scheme claim that around 25,000 people will lose their homes and have blocked access roads to the dam site to prevent construction. In March this year, the Latin American Water Tribunal, a regional non-governmental organisation, argued that the project ‘should be suspended, given that it does not show benefits for the local population, nor does it contribute to regional development or protection of the environment and natural resources’. In 1999, the government confidently predicted that the project would be operational by 2008, so it is likely that the 2012 completion date could yet slip.

In addition, many of the remaining undeveloped sites lie in areas that are either environmentally sensitive or would involve the relocation of large numbers of people and the loss of productive land. However, according to Sener, the country’s existing mini hydro generating capacity is just 8MW, so there is plenty of room for expansion here. For instance, around 100 sites for small and micro hydro projects have been identified by the National Commission for Energy Conservation (Comisión Nacional para el Ahorro de Energía – CONAE) in the states of Veracruz and Puebla. The projects would provide combined generating capacity of 400MW and CONAE is confident that at least 225MW of this potential capacity will be developed over the next decade.

Looking ahead, it is difficult to assess the future prospects for the Mexican hydro sector. Much depends on regional attitudes to dam construction and global attitudes to tackling global warming. The Boca del Cerro and other schemes could more than double the current generating capacity of the hydro sector but at present the government is likely to resort to yet more gas fired plants in order to avoid political controversy. In the longer term, however, a reassessment of the country’s hydroelectric potential is more than likely.