The steel box frame structure above the damaged Fukushima Daiichi unit 4 reactor has been completed, after less than four months of work. In other news, TEPCO has reinforced protection of the damaged unit 3 spent fuel pool, established an internal regulator, and announced plans to take down the unit 1 cover. 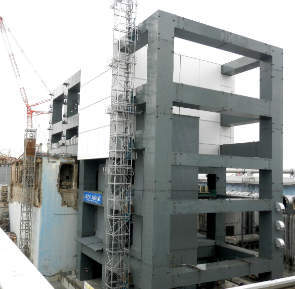 The steel box frame structure above the damaged Fukushima Daiichi unit 4 reactor has been completed, after less than four months of work. In other news, TEPCO has reinforced protection of the damaged unit 3 spent fuel pool, established an internal regulator, and announced plans to take down the unit 1 cover.

The unit 4 fuel retrieval tower, which hangs over the reactor, is made of a total of 87 box beams, 38 columns and 46 horizontal beams. It will support a bridge crane that will remove the contents of the unit 4 spent fuel pool; installation should start in June. Parts of the structure have already been cladded; the design calls for cladding to completely cover the cantilevered section.

Meanwhile, work has continued to protect the unit 3 spent fuel pool from falling debris as the destroyed upper floors are gradually cleared. In late May, work on the spent fuel pool cover extended the cover first installed in April.

TEPCO has established an internal regulatory agency, the Nuclear Safety Oversight Office, following instructions in the March 2013 nuclear safety reform plan. Its job is to gather domestic and international nuclear safety findings, which an independent third party organization will use to evaluate the TEPCO nuclear power business operation, and report to the board of directors. The office will also monitor safety and operational processes and make suggestions. The head of the new office is John Crofts, former director in charge of security assurance of the United Kingdom Atomic Energy Authority.

Also, TEPCO has announced plans to remove the unit 1 building cover to remove its spent fuel. The cover was originally installed in 2011, but blocks access to the spent fuel pool, and the debris that covers it and the rest of the building. First, the cover will be dismantled and debris will be removed. Next, a fuel handling machine will be installed, and the building cover will be modified and recovered (in about four years). Next, the fuel will be removed, and a container will be installed. Finally, fuel debris will be removed.

TEPCO said that the current radioactive releases are one-hundredth what they were when the cover was installed, because of continuous reactor cooling and installation of the primary containment vessel gas control system. Since mid-2012, radioactive release has been generally stable and below the building cover detection limit, which appears to be about 500,000 Bq/hr. TEPCO said that it expects removing the cover would have little impact on the overall dose at the site boundary, which is 0.03 mSv/yr. Measures to reduce radiation release include operation of the PCV gas control system, reducing the equipment hatch opening, and spraying antiscattering agent on the building.

The first step is to stop the building ventilation and filtration unit (40,000 m3/hr) in perhaps August-September 2013. It will be relocated. Then work to begin dismantling the cover is expected to start in late 2013 or early 2014.