Forsmark most suitable for Sweden’s repository

Of all the Swedish sites investigated as a possible deep geologic repository for used nuclear fuel, Forsmark is the most suitable, according to the Swedish Radiation Safety Authority (SSM). 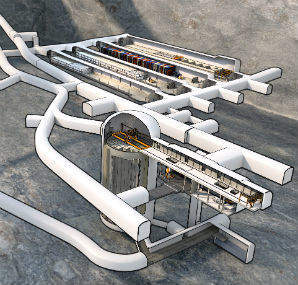 Of all the Swedish sites investigated as a possible deep geologic repository for used nuclear fuel, Forsmark is the most suitable, according to the Swedish Radiation Safety Authority (SSM).

The Swedish Nuclear Fuel and Waste Management Company, SKB, has chosen the site, at Söderviken southeast of the Forsmark nuclear plant, because of the dry rock and low rate of fracturing in its granite bedrock as well as the slow movement of groundwater. SSM said its "preliminary assessment" is that the site selection process has led to the most suitable site being chosen.

SSM said it is too early to draw any final conclusions and there are remaining issues for it to review and consider before submitting its formal opinion to Sweden’s land and environment court (scheduled for spring 2016) and to the government. SSM said the government is expected to make a final decision in 2017. SKB is hoping construction and commissioning of the repository can be completed by 2028, when trial operations would begin. Commercial operation is scheduled for 2030.

Forsmark was put forward by local leaders as a candidate for the underground disposal facility in 2002. The selection process included several other candidate sites and Forsmark, which enjoyed 77% local support, was finally chosen in 2009. SKB submitted its application to build there in 2011 and this approval process is on-going. SSM’s Ansi Gerhardsson said, "Our preliminary assessment is that the site selection process, based on its preconditions vis-à-vis volunteering municipalities, has culminated in the most suitable site for a repository of the type planned by SKB."

The repository will have capacity to store 12,000t of used nuclear fuel in 6000 copper-cast iron canisters, which would be surrounded by bentonite clay to absorb any future leakage. It will feature around 60 kilometres of disposal tunnels at a depth of 500 metres in 1.9bn year-old granite. Gerhardsson added, however: "It is still too early to draw any conclusions on what our overall assessment will be. SSM still has critical matters of substance to examine, for example relating to the long-term integrity of disposal canisters."