Europe’s first variable speed unit has been commissioned at the Goldisthal pumped storage power plant in Thuringia, Germany. It is one of two such units installed at the plant, together with two fixed speed units. 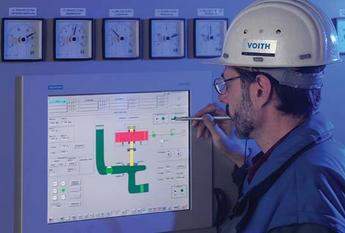 Pump turbines, rated at 265MW each, were supplied by Voith Siemens Hydro in consortium with VA Tech Hydro and CKD Blansko Engineering, with Voith taking responsibility for the hydraulic design and the control system, including the variable speed technology.

The unit’s rated speed of 333rpm over an operating range of -10% to +4% is automatically controlled by the turbine governor. Electricity generation during turbine mode and operation during pumping mode can be adapted to individual load conditions in the grid. Pumping mode within the 170–300MW range, says Voith, can be regulated with little changes in speed.

Variable speed control means that power input during pumping can be controlled continuously and efficiency in turbine part load ranges improved. Start up of the turbine is faster and there is smoother operation for the complete unit compared to fixed speed units. This makes variable speed beneficial to overall unit performance and also flexibility of operation within grid regulation, says Voith.

The Goldisthal scheme is to reduce peak load deficits and to provide a minute reserve for the loss of larger power station blocks in the Vattenfall grid.