Fennovoima said that it has submitted three separate water permit applications relating to the construction of a nuclear power plant at Pyhäjoki in Northern Finland. 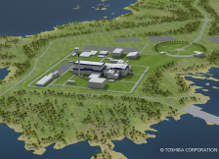 One of the applications covers the constructions of sea route, harbor, and cooling water intake. Another permit is being applied for building cooling water outlet and covers banks related to them. Also, a permit is needed for the sea dumping area of the nuclear power plant.

"Studies were executed in the sea and land areas at the site for about a year. Likewise, planning for construction and water structures continued for about a year," Fennovoima said in a statement.

Fennovoima said that Northern Finland’s Regional State Administrative Agency were to receive the applications on 12 February 2013.

Fennovioma, founded in 2007, is a Mankala company, a form of cooperative producing electricity for its owners’ needs at production cost in proportion to their ownership share. E.On currently owns 34% of the company, with 67 shareholders owning the remaining 66. However, in October the German utility announced its intention to sell its share of the project.

The company has received commercial bids from Areva (EPR design) and Toshiba (ABWR design) for the construction of a nuclear power plant, Hanhiviki 1, at the site. A supplier is due to be selected this year.