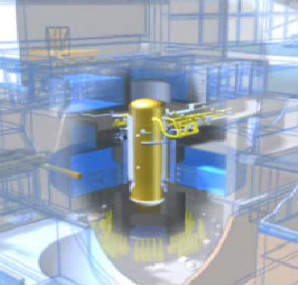 In March 2011 the NRC issued technical conclusions about the design that were positive, and drafted approval regulation, but then halted the process when information came to light that suggested problems with calculations used for the steam dryers, which prevent moisture from damaging the plant turbine, the USNRC said.

Around that time, the Grand Gulf BWR applied to install a replacement steam dryer designed using the same methods as that proposed for the ESBWR. A further call for supporting information lead to the NRC’s realization that ‘there were errors in the information we were initially given to determine how the ESBWR steam dryer would react when that design is operating,’ the USNRC said. In the USNRC’s letter to GE-Hitachi, it said that there were errors in benchmarking used as a basis for determining fluctuating pressure loading on the steam dryer, and errors in steam dryer modelling parameters.

Now, with the issuance of revision 10 of the ESBWR design control document, submitted 1 April 2014, those issues have been resolved.

"We spent 2012 and 2013 making sure we had all the necessary information from GE-Hitachi on the ESBWR steam dryer design. We’ve completed the review of the additional steam dryer design information and now have what we need to complete the design certification," said the NRC’s Michael Mayfield, director of the advanced reactor and rulemaking programme, in a blog post.

As a result, the NRC expects to seek public comment on a supplemental proposed certification rule next month and to send a draft final rule to the five-member Commission in July. This process could lead to final certification of the ESBWR in September 2014.

Caroline Reda, chief executive officer of GE-Hitachi, said: "We are excited to reach this important milestone in the development of the ESBWR. We look forward to an expeditious rulemaking process to certify the ESBWR design, paving the way for the reactor’s construction in the U.S. and supporting opportunities for us globally."

The NRC also said that the two utilities applying for licenses to build ESBWRs, Detroit Edison in Michigan and Dominion in Virginia, will have to update their applications to account for any changes to the design.

The ESBWR design is a direct-cycle BWR design with passive safety features to allow cooling with no external power or operator action for more than seven days.