E.ON may close down Irsching 5

The owners of the 840 MW Irsching 5 gas fired power plant in Bavaria - E.ON, N-Ergie, Mainova and HSE - will meet on March 30 to decide whether to mothball the plant. 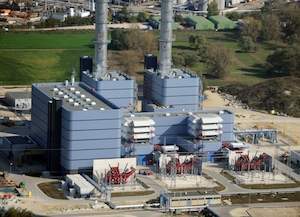 The owners of the 840 MW Irsching 5 gas fired power plant in Bavaria – E.ON, N-Ergie, Mainova and HSE – will meet on March 30 to decide whether to mothball the plant. The company will keep the plant operational until the end of March, but says that operating it is not profitable at current low wholesale power prices and reduced run-time hours.
CEO Johannes Teyssen said "For us, a temporary shutdown is the only economically viable solution." He expects "fair compensation" to continue operations. It has been widely reported that Irsching 5 will only stay open if E.ON receives some sort of financial incentive from the German government to do so. An alternative would be to keep the plant on standby, in the so-called strategic reserve, for grid balancing purposes, a position already reached by two older E.ON plants in southern Germany, Irsching 3 and Staudinger 4. E.ON and RWE have already stated that they prefer the strategic reserve option while discussions aimed at establishing a capacity payment system on the lines of that in the UK are still ongoing.
The owners of Irsching 5 had already warned of the possible closure, in a letter sent to Bavarian prime minister Horst Seehofer in November, saying that they were considering shutting down the plant because operations were no longer profitable. At that time the operator undertook to keep the plant running until the end of March to provide time for further negotiations.
Irsching 5 cost €400 million ($523 million) to build 3 years ago. But in 2012 the plant operated less than 25 % of the time as falling power prices made burning natural gas unprofitable – by a large margin. As Europe’s weak economy holds back electricity demand, cheaper coal, the requirement to buy renewable energy, and the collapsing cost of carbon permits are undercutting gas-fired plants. Irsching-5 is currently producing less than half of its nameplate energy capacity. In 2012, the unit had only been dispatched for 2000 runtime hours, although it was originally designed to operate 4000 hours a year, according to E.ON.
Now E.ON is planning to raise more than €2 billion in the next two years selling regional units and a stake in nuclear- fuel processing business Urenco, to help reduce its level of debt and provide capital for expansion in emerging markets including Brazil and Turkey. Economic net debt fell to €35.9 billion as of end-2012 from €36.4 billion a year earlier, according to an earnings statement on 13 March. Net income was €2.22 billion last year compared with a €2.22 billion net loss a year earlier.