The 260-tonne, 43-meter diameter dome has been installed on the reactor building of the Flamanville 3 EPR, under construction in France. 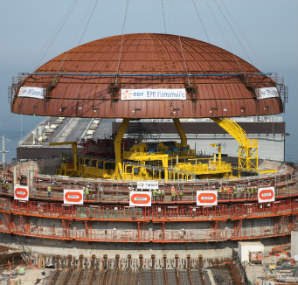 The 260-tonne, 43-meter diameter dome has been installed on the reactor building of the Flamanville 3 EPR, under construction in France.

The dome was lifted to a height of 200 meters using one of the world’s most powerful cranes on 16 July. Bouygues Construction, the company in charge of the civil engineering works for the Flamanville EPR was responsible for the operation, which required 4 months preparation and involved 30 employees.

The 1650 MWe Flamanville 3 EPR first began construction in December 2007. According to EDF construction is now entering its "final phase," with 95% of civil engineering work completed, along with 46% of electrical and mechanical installation work.

Work will now start to weld an air-tight seal around the circumference of the dome, which will then be clad with 7000 tonnes of concrete to boost its strength.

Heavy components, including the steam generators, reactor vessel and pressurizer are also expected to be installed in the reactor building "over the next few months," EDF said.

Flamanville 3 is scheduled to start producing electricity in 2016.