Closing US nuclear plants bad for the environment – report

A US report has argued that the closure of nuclear reactors in the USA threatens its ability to meet its climate change goals. 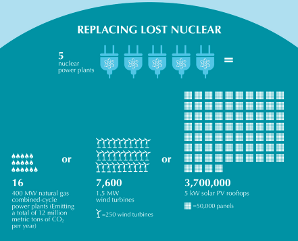 A US report has argued that the closure of nuclear reactors in the USA threatens its ability to meet its climate change goals.

"Preserving the existing U.S. nuclear reactor fleet for as long as possible is a critical element in the transition to a low-carbon future," says Doug Vine, author of Climate Soltuions: the Role of Nuclear Power, published by the Centre for Climate and Energy Solutions, an independent non-partisan nonprofit organization, and the successor to the Pew Centre on Global Climate Change.

Since late 2012, four power companies have announced the retirement of five nuclear reactors in the United States, it reports, and utilities are threatening other closures, the report says.

But it adds that nuclear power supplies 19 percent of total U.S. electricity production with essentially zero greenhouse gas emissions. As renewables such as wind and solar do not provide reliable baseload power, any additional loss of nuclear generating capacity would result in increased carbon dioxide emissions, making it more difficult for the United States to achieve both its 17 percent emissions reduction pledge by 2020, and greater reductions in the future.

With the necessary maintenance, most of the US’s 100 operating reactors should be able to continue providing power for two decades or more. However, these reactors may not be able to operate until the end of their useful life due to an array of market and policy challenges, the report says.

Lower natural gas prices and increases in wind power generation – both of which have positive climate benefits – contribute to lower wholesale market prices, which determine merchant nuclear generators’ revenue. (Around half the nuclear fleet operates as merchant generators, that is, not funded by ratepayers.) Wholesale power markets are also technology-agnostic, and do not value zero-carbon or baseload sources more highly than their alternatives. Meanwhile, life-extending capital investments and mandated post-Fukushima safety enhancements are adding to nuclear power plant costs. Together, these forces are challenging the economic viability of some nuclear power plants, the report argues.

Depressed power prices, higher operating costs and power market design challenges were among the reasons cited for the early retirement of the Kewaunee (Wisconsin) nuclear power station (May 2013) and the Vermont Yankee nuclear power station (Fall 2014). It is important to note that the remaining reactor retirements at San Onofre and Crystal River were the result of maintenance issues, which is an additional factor that can affect the lifespan of nuclear power reactors, the report says.

Safety, waste, and proliferation concerns are important in considering the future of nuclear power. But we also should consider how further loss of baseload nuclear generating capacity could impact electric system reliability and result in increased carbon emissions, the report concludes.

Photo: Part of CES infographic on the role of nuclear power