A ceremony to mark the official start of production Canada's Cigar Lake uranium mine and the McClean Lake mill in northern Saskatchewan, took place on 24 September. 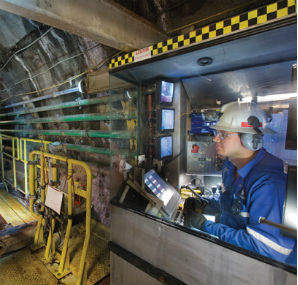 A ceremony to mark the official start of production Canada’s Cigar Lake uranium mine and the McClean Lake mill in northern Saskatchewan, took place on 24 September. Mining at Cigar Lake began in March 2014, after nine years of construction. The first packaged uranium concentrate from the mine was produced at the McClean Lake mill in October 2014 and the mine was declared in commercial operation in May.

Cigar Lake is owned by Cameco (50.25%), Areva Resources Canada (37.1%), Idemitsu Canada Resources (7.875%) and Tepco Resources (5.0%) and is operated by Cameco. The McClean Lake mill is owned by Areva (70%), Denison Mines (22.5%) and OURD Canada (7.5%) and is operated by Areva. The mill has been upgraded to enable it to process Cigar Lake’s high-grade ore without dilution, and expansion is planned for completion in 2016 that will enable it to produce up to 24 million pounds U3O3 a year.

Cigar Lake’s deposit comprises 234.9 million pounds U3O8 (90,400 tU) of proven and probable reserves averaging over 17% U3O8. It is the world’s second-largest high-grade uranium deposit, exceeded only by McArthur River, also in northern Saskatchewan. However the orebody is located 410-450 metres below the surface, at the boundary between dry basement rock and water-bearing sandstone, and mining has proved technologically difficult. The ore zone and surrounding ground must be frozen before mining to prevent water from entering the mine workings and to stabilize weak rock formations.

The ore is removed using a high-pressure water jet to mine out cavities in the frozen ore. The mixture of ore and water is then pumped to underground grinding and processing circuits. Thickened ore slurry is pumped to the surface and transported in tanker trucks 70km to McClean Lake mill for propcessing.

Since Cigar Lake’s discovery in 1981 the project has remained idle in face of low uranium prices. The mine also suffered catastrophic floods in 2006 and 2008 after construction began, and costs rose from an originally estimated $450m to $2bn. The mine currently employs more than 600 people, more than half from northern Saskatchewan.