US-based TerraPower, founded in 2006 to develop advanced nuclear technology and backed by Microsoft founder Bill Gates, has signed a memorandum of understanding with China National Nuclear Corporation (CNNC) for cooperative work on development of a travelling wave reactor (TWR), a company statement said on 23 September. 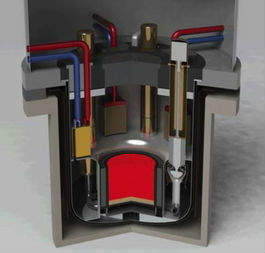 US-based TerraPower, founded in 2006 to develop advanced nuclear technology and backed by Microsoft founder Bill Gates, has signed a memorandum of understanding with China National Nuclear Corporation (CNNC) for cooperative work on development of a travelling wave reactor (TWR), a company statement said on 23 September. The two companies plan to work together to complete the TWR design and commercialise TWR technology.

TerraPower has been working with CNNC for years, but Gates said the latest agreement was a "milestone in our relationship". The collaboration aims to pioneer new options in civilian nuclear energy that address safety, environmental and cost concerns, according to TerraPower CEO Lee McIntire. "Additional work must be done to define what a possible joint venture may look like, but this MOU signals that we are well on track," he said.

The TWR is a Generation IV, liquid sodium-cooled fast reactor based on existing fast reactor technologies. Innovations in metallic fuel, cladding materials and engineering make it possible to utilise depleted uranium as the primary fuel. These innovations greatly simplify the nuclear fuel cycle by eliminating or reducing the need for enrichment, reprocessing, and waste storage and disposal. Fissile fuel is both produced and then consumed in-reactor, greatly improving the fuel efficiency of the TWR and resource availability for the reactor.

TerraPower said it is trying to develop a 1,150MWe TWR to operate for up to 100 years without refuelling or removing any used fuel from the unit. Initially a 600MWe prototype will be built. The TWR would be designed to operate indefinitely using natural uranium, depleted uranium, used light water reactor fuel, or thorium as reload fuel after start-up.

According to TerraPower, the TWR increases fuel efficiency 50-fold and directly converts depleted uranium to usable fuel as it operates. As a result, this "inexpensive but energy-rich fuel source could provide a global electricity supply that is, for all practical purposes, inexhaustible", TerraPower said.

In partnership with Areva Federal Services, TerraPower has manufactured the first full-size test assembly for the TWR. In February 2014, Babcock & Wilcox said it would support the development of the TWR under a memorandum of understanding signed by the two companies. Chinese vice-premier Wang Yang, who recently met Gates in Beijing, said the Chinese government "is willing to support cooperation between enterprises on energy technology", Xinhua News Agency said. In 2013, South Korean president Park Geun-hye gave her backing to cooperation for a feasibility study into the TWR following talks with Gates.

TerraPower is restarting US-based development of fast reactor fuel in preparation for construction of the prototype TWR. Working with Idaho National Laboratory (INL), TerraPower commissioned a lab-scale fuel fabrication facility, which is expected to produce the first extrusions of metallic nuclear fuel in the US since the 1980s. Fuels are also being tested in INL’s advanced test reactor. Recently INL completed the first successful test of fabrication equipment in its experimental fuels facility by subjecting a cylindrical billet of depleted uranium metal to high temperature and pressure to force it through a shaped die. The process produces a thinner, longer form suitable to use as fuel pins for continued experiments and testing of fuels for the TWR.