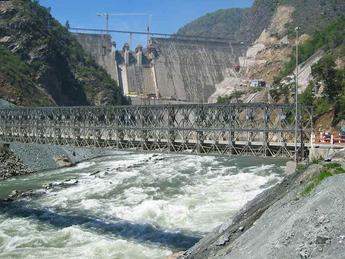 The Chilean government faces a classic dilemma in deciding which form of power generation to pursue. Although Santiago has created a competitive market, with a number of rival generating companies, it has actively used regulatory changes to nudge operators towards one form of electricity production or another. As elsewhere in the world, a series of debilitating droughts reduced Chilean enthusiasm for hydro schemes but recent gas supply problems have prompted a government rethink and the tide may be about to turn back in favour of hydro again.

Hydro schemes were the foundation stones of the Chilean power sector but increasingly frequent droughts over the past 30 years have led to a corresponding increase in electricity shortages. As a result, the government decided to make the most of its own limited gas reserves and the larger fields in neighbouring Argentina to encourage the development of gas fired plants. Natural gas consumption fluctuated around the 1.42Bm3 a year level through the 1980s and into the early 1990s and it was not until imports of Argentine gas began in 1996 that gas consumption began to rise steeply, to 6.5Bm3 by 2002. Seven gas pipelines were built to transport gas from Argentina to Chile in a relatively short space of time as the Chilean dash for gas took off.

The move to gas made Chile highly reliant on Argentine imports. Given the fluctuating state of relations between the two Southern Cone neighbours over the previous 30 years, many political opponents criticised the government for placing the country in such a vulnerable position. However, it was not geopolitical enmity that eventually turned this dependency into an energy crisis, but rather Argentina’s own gas shortages. At the start of 2002, the Argentine government fixed gas prices at a very low level, which had the twin effects of increasing electricity consumption and discouraging gas exploration. Rising demand for electricity and an accompanying lack of gas prompted the Argentine government to slash its gas exports to Chile by up to 50%. The cuts triggered serious power cuts in Chile, which faced a 2.3Mm3 a day shortfall.

Supplies have still not returned to their original levels and the Chilean government is now convinced that the domestic power sector needs to be more responsive to changes in gas supplies and rainfall levels. One strategy currently under discussion is to tweak the market by offering financial rewards for the development of thermal plants that could quickly and easily be converted from gas to other forms of feedstock, such as coal or oil. However, turning existing plants into dual use facilities would mean decommissioning them for a period, at a time when the power sector is still struggling with reduced gas imports.

Buenos Aires has promised to allow domestic retail electricity tariffs to float at a market rate, with the aim of dampening demand, but there is no guarantee that gas supplies could not be curtailed again in the future. Argentine annual gas production is 37.6Bm3, out of total proven reserves of 61.1Bm3, so its reserves to production ratio is fairly low. New discoveries may be made but Chile would be unwise to rely too heavily on Argentine gas imports.

Bolivia offers an alternative source of natural gas but preventing the export of gas to Chile is one of the biggest political issues in Bolivia. Many citizens do not want to allow Chile access to its natural resources because of resentment over the loss of the country’s coastal provinces to Chile in the 1879-1883 War of the Pacific. The prospect of exporting gas to Chile, even via a third party such as Argentina, led to riots in the landlocked country. However, a liquefied natural gas (LNG) plant with capacity of nearly 3Mm3 a day is planned for Quintero in central Chile, so imported LNG is another option for feedstock.

The power sector could also minimise electricity supply problems by linking the country’s four separate power grids: the Sistema Interconectado del Norte Grande (SING), the Sistema Interconectado Central (SIC) plus the two far smaller Aysén and Magallanes grids in the south. Most of the country’s gas fired plants supply SING, while almost all Chilean hydro capacity lies within the SIC area. As a result, different parts of the country are unduly troubled by either gas supply or climatic problems. Connecting the four, or at least the two main grids, would spread the risk of power shortages across the country.

Despite such measures, it seems unlikely that current gas sector plans will be able to cope with increases in Chilean demand for electricity, which is forecast to grow at 5% a year over the next decade. The development of some planned gas fired plants, such as the 370MW San Isidro and 740MW Totihue plants, could be postponed indefinitely. In addition, unlike Argentina, Chile has no nuclear industry, little wind power and the government favours gas over oil and coal as a feedstock in new thermal plants, so there seems little alternative but to develop new hydro projects. Moreover, as Table 3 demonstrates, despite the move to gas during the 1990s, hydro schemes continue to account for 4086MW out of the national generating capacity of 10,738MW. They also provide around 50% of all actual electricity production.

Attention is already turning to new hydro schemes, although the most recent hydro additions to the country’s generation stock were planned before the gas supply problems. The 690MW Ralco project, which lies 500km south of Santiago on the river Bío Bío and which is owned and operated by Endesa of Spain, is Chile’s biggest hydro facility. It was brought onstream in September 2004, adding 18% to the SIC grid generating capacity. The project, which cost $600M to develop, was originally designed to provide generating capacity of 570MW but technical alterations boosted the flow rate from 368m3/sec to 453m3/sec. Its development was held up for around two years because of resistance from local people who opposed the flooding of land traditionally occupied by the Pehuenche ethnic group.

The 155MW La Higuera project on the river Tinguiririca in central Chile is currently being constructed by Hidroelectrica La Higuera – a joint venture between Statkraft Norfund Power Invest of Norway and Australia’s Pacific Hydro Limited. The scheme should be complete by 2008. Hidroelectrica La Higuera secured backing for the project from the state environmental regulator, Corema, and hopes to conclude a supply agreement with Chilectra, a subsidiary of local power company Enersis. The joint venture also has plans for a second phase development at the site, in the form of the 145MW La Confluencia scheme.

The La Higuera and La Confluencia projects aside, Pacific Hydro is otherwise keen to expand its operations in Chile. The company bought the 37MW Pangal and 39MW Coya plants from Corporación Nacional del Cobre de Chile, the country’s state owned copper company, last year and is now considering developing more of the hydro potential on the upper Cachapoal river, where the Coya installation is located.

Chile already imports the lion’s share of its total energy needs and so the new enthusiasm for hydro projects is bolstered by the government’s determination not to threaten its energy security still further. Although there are currently 19 separate generating companies in Chile, the state still plays a significant role in determining wholesale power tariffs and so the government could intervene to make new hydro schemes more financially attractive. It is estimated that 80% of Argentina’s technically viable hydro potential has not yet been developed, so it too could be persuaded that new hydro schemes would be welcome.

Over reliance on hydroelectricity does make a country vulnerable to prolonged droughts, particularly where there is not a strong regional power pool. However, as the experiences of Chile and Argentina have shown, over reliance on any other form of power production can be equally problematic. Beyond increasing the number of gas suppliers, there seem to be two main solutions to the Chilean dilemma. Firstly, the government can aim for an even better balanced generation mix that would more easily be able to respond to climatic and energy supply shocks.

Secondly, more widespread trade in electricity and the creation of a genuine South American power pool would greatly reduce the level of vulnerability on all fronts. The continent comprises a variety of climatic zones, so lower than expected rainfall in one part of South America is unlikely to be mirrored across the wider region. Areas that are seasonally power poor could clearly import electricity from regions that are seasonally power rich and the direction of trade could be switched when conditions change. Both private and state owned power companies would be more confident when developing new hydroelectric projects if they were sure that they could target both local and continental demand. On the other hand, Santiago could be discouraged from increased electricity trading because of the difficulties encountered with Argentine gas imports.

However, energy importers would no longer be dependent on importing gas or electricity from a single source. The risk and political responsibility would be spread, so decisions on halting electricity and gas exports would have far less scope to trigger bilateral political disputes that could influence power sector developments in the future. Cross-border transmission links have been developed over the past few years and South America has several examples of joint management of hydro facilities. For example, Argentina jointly owns the 3200MW Yacyreta and 1890MW Salto Grande hydro schemes with Paraguay and Uruguay respectively. South America could build on its track record of regional cooperation in the sector to gradually work towards the creation of a power pool.

If national power pools are more effective than a series of local arrangements, then surely continent wide power pools would promote even greater efficiency. Creating the physical infrastructure for a more complete South American power grid will require a great deal of investment, while a mountain of changes need to be made to the regulatory environments in all markets on the continent before short term trade in electricity becomes the norm. Yet there is no doubt that such a pool is the logical conclusion of the ongoing process of power sector deregulation that is taking place in Chile, Argentina and almost everywhere else on the continent.

If and when a continental power pool begins to take shape, a series of new hydro schemes could be developed to take advantage of a huge market in electricity. Gas fired power plants could just as easily take advantage of the opportunity of targeting a number of different markets but hydro is likely to play a key role in providing the steep increase in generating capacity that will be required in the region over the next decade or two. In the meantime, the Chilean government must decide whether its electricity needs will be best supplied by diversifying its gas suppliers or building new hydro schemes. It looks as if it will opt for a combination of both, but there is no doubt that the recent gas supply problems have highlighted some of the advantages of hydro schemes to a country that had begun to lose faith in the technology.