The New York Power Authority (NYPA) marked the completion of a nearly four-year overhaul of its Blenheim-Gilboa pumped storage power project in the northern Catskills at an event last week where NYPA President and Chief Executive Officer Richard M. Kessel was joined by state and local officials in highlighting the milestone. 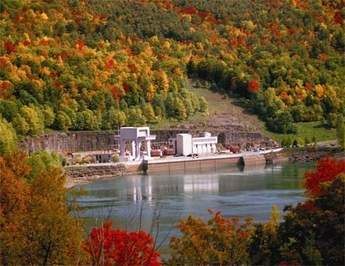 On May 22, NYPA returned to service the last of Blenheim-Gilboa’s four pump-turbine generating units to undergo replacement as part of the more than $135M upgrade of the 37-year-old facility. The more efficient, modern units increase the total capacity of the facility by 120MW, or 11.5%, to 1160MW.

“Our maximizing of Blenheim-Gilboa’s efficiency ¬– and its ability to generate more power from the same amount of water – contributes to the overall reliability and flexibility of the state’s electric power system,” Michael J. Townsend, NYPA chairman, said. “This has been a vital initiative for enhancing the project’s capability for harnessing the stored water from the project’s upper reservoir to produce economical power during the times of peak demand. The Life Extension and Modernization Program also reflects the priority the Power Authority has long given to being a good steward of its hydroelectric resources, which account for nearly 80 percent of its statewide power generation.”

NYPA began the LEM at Blenheim-Gilboa, which is the fifth largest pumped storage project in the US, in September 2006 when the first of the four pump-turbine generating units was taken out of service for refurbishing. The process was repeated three times, in the fall of 2007, 2008 and 2009, with each unit returned to service by the following summer with an increase in maximum capacity from 260MW to 290MW per unit.

The phased-in approach to Blenheim-Gilboa’s refurbishing limited the impact of equipment being taken out of service. During each phase of the multiyear upgrade, three pump-turbine generating units were operating, except for an approximately two-month period at the beginning of each stage, around the start of fall. In the course of that period, the water level in the upper reservoir, which has a capacity of five billion gallons, was substantially lowered in order to accomplish the replacement of a spherical valve on the unit being refurbished.

In addition to replacing the turbine-generators and spherical valves, the upgrade included replacement of main power transformers, circuit breakers, exciters and related equipment.

“The challenging schedule of the LEM required the just-in-time delivery of new and conditioned parts from manufacturers to support the critical path of the job, while taking into account the limited space at the facility for storing large components like the generator rotors, which weigh about 500 tons,” Lynn Hait, Blenheim-Gilboa regional manager, Central New York, said. “Throughout the upgrade, we were acutely conscious of the importance of each phase being completed by June, in time for the summer peak demand season. The fact that we achieved this during each of the four successive years of the program is a credit to the NYPA engineers and other staff members who gave their all to this endeavor.”

The LEM program marked the first major overhaul at Blenheim-Gilboa since it went into service in July 1973 at its Schoharie Creek site in the Towns of Blenheim and Gilboa in Schoharie County, about 40 miles southwest of Albany. The Federal Energy Regulatory Commission authorized the work.

NYPA is currently conducting a LEM program at its St. Lawrence-Franklin D. Roosevelt Power Project in Massena, with that initiative more than three-quarters complete and scheduled to be finished by 2013. It also completed a 15-year upgrade of its Niagara Power Project, in late 2006, to enhance the efficiency of that project’s main generating facility, the Robert Moses Niagara Power Plant, and extend its operating life.