The Canadian Government has approved $5M in funding towards the development of a 1MW+ tidal project in the Bay of Fundy, Nova Scotia. 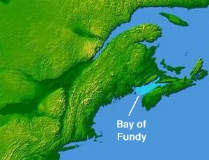 Nova Scotia’s Bay of Fundy is uniquely powerful with the potential to produce 2000MW of renewable energy; however, it is more aggressive than other tidal sites around the world, making site development a significant engineering challenge.

Atlantis Resources is developing a 1MW+ tidal generator, the ARC1000, suited for this harsh environment. Based on results from a current prototype operating in Scotland, the project intends to re-engineer the technology with new features for anchoring, self-stalling blades in high currents, and horizontal alignment.

Image: The Bay of Fundy, shown on the east coast of North America. Courtesy Decumanus