After almost 18 months of work on the two faces of the 22MW Sanima Mai hydropower project in Ilam, East Nepal, main contractor Himal Hydro and General Construction broke through the 2,208m tunnel ahead of schedule. 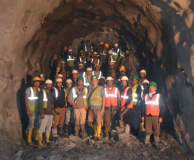 Conditions through the Siwalik massif were uncertain as this was the longest tunnel so far in the Nepalese lower zone of the Himalaya. With random alternating narrow banding of Mudstone, Siltstone and Sandstone, Himal Hydro drill and blasted their way through with more ease than expected, the company said. The tunnel turned out to be relatively dry with good stand up times for an adapted NATM approach. However, with limited overburden and localised swelling conditions, concrete lining scope has increased.

Due for completion in mid-2014, the project is the largest hydro project to be constructed in Nepal fully funded from the Nepalese community. Loans are provided entirely from the Nepal banking community while equity has been raised among local investors and Nepalese entrepreneurs living in other countries.

With huge potential of 83,000MW of hydro with only about 650MW installed capacity, Nepal’s hydro industry continues to grow. Recently Nepali government’s regulatory organization introduced attractive new sales tariffs for production of Hydro electricity from storage projects, as opposed to the many run-of-river projects, to stimulate further growth.