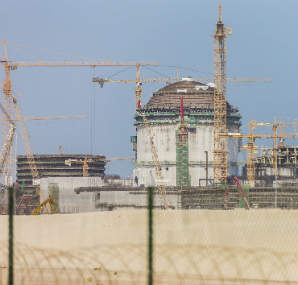 This is the first safety concrete to be poured at Unit 3 and is the first stage in building the third reactor for the UAE’s nuclear program. Preparation works have been carried out over a 12-month period to arrive at the stage where the concrete could be poured. This extensive preparation has included excavation works, lean-concrete to provide a base, waterproofing and reinforcing steel installation.The safety concrete is the placement of the safety related concrete that forms part of the lower basement structure of the reactor containment building. Concrete placements will be a regular and ongoing process after the first placement is completed.

Construction will now continue by concrete being completed in height increasing stages until the Reactor Containment Building wall will be installed. Construction of the reactor containment building will be completed over the next three years and Unit 3 is on track to enter commercial operations by 2019.

"The concrete pouring is yet another key accomplishment for ENEC and the UAE’s peaceful nuclear energy program," said Mohamed Al Hammadi, CEO of ENEC. "ENEC is working hard to reach its construction targets on schedule and deliver safe, efficient and reliable nuclear energy to the UAE starting by 2017."

Following an 18-month review by the UAE Federal Authority for Nuclear Regulation (FANR) and a team of international nuclear energy experts that included post-Fukushima issues, the regulator granted ENEC approval on 15 September to commence construction of units 3 and 4.

ENEC said that unit 1 is already more than 57% complete and due to connect to the grid in 2017, and unit 2 a year later. FANR granted a construction licence for Units One and Two at the Barakah site in July 2012. Once the four reactors are complete, the UAE’s nuclear program will provide approximately 25% of the UAE’s electricity needs, saving up to 12 million tonnes of greenhouse gas emissions each year.

The licences permit ENEC to construct the reactors but ENEC must apply for a separate operating licence before it can begin to operate them. ENEC is expected to submit an application in 2015 for a licence to operate Units 1 and 2, according to FANR.