A welcome return for hydro

The Scottish government is working hard to claim the title as the green energy capital of Europe. In recent years the pace of hydroelectric development has slowed, but publication of a new study has established hydro’s important role in fulfilling this ambition. There is now tremendous enthusiasm to ensure that Scotland’s hydro power legacy lives on. Suzanne Pritchard reports 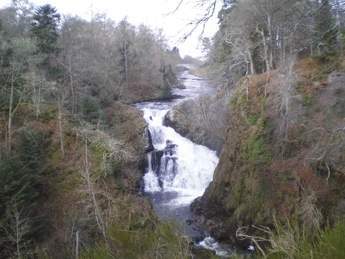 Hydro power is back. And it’s back in a big way in Scotland. These were the words of Scottish First Minister Alex Salmond following publication of the Scottish Hydropower Resource Study in September 2008. Energy Minister Jim Mather echoed his colleague’s sentiments. ‘We are desperately enthusiastic about hydro,’ he said.

So how did this hydro study prompt such an accolade from the Scottish government? As David Williams, chief executive of the British Hydropower Association admitted, hydro power has long been the ‘quiet’ renewable. The success behind this study is that it has proved the vital role which hydro can play in the Scottish drive for renewable energy generation. Furthermore, Williams believes that the study will stimulate development of new projects of all sizes, in a country which has already firmly embraced hydro technology.

The Scottish Hydropower Resource Study was carried out for the Forum for Renewable Energy Development in Scotland (FREDS). A partnership between industry, academia and government, FREDS has a role to play in helping Scotland meet its 2020 target of generating 50% of electricity from renewables. Prior to this in 2011, a milestone target has also been set at 31% – equivalent to approximately 5GW of installed capacity.

As Energy Minister Jim Mather said, these renewables targets will enable the government to capitalise on the country’s huge renewable energy resource, securing significant economic development. ‘In making Scotland the green energy capital of Europe, we want to utilise the rich mix of our diverse renewables potential,’ he stated. ‘Hydro remains a hugely important part of that mix.’

With the above thought in mind, the hydro resource study was commissioned to provide an assessment of potential hydro power development within Scotland. It was also to provide an estimate of the theoretical potential for expanding hydro. All of this, Mather added, would help to ensure that this form of energy continues to contribute to Scotland’s renewables targets.

‘One reason why we set up the study was to emphasise and give confidence to people that hydro still has a big part to play,’ First Minister Alex Salmond said. ‘The report indicates that small scale hydro projects taken together could light up to a quarter of Scottish homes. What is so exciting is that these small and micro hydro projects could commit half as much again of the enormous contribution that hydro already makes in this country. We can say that hydro is back in a big way in Scotland.’

Installed hydroelectric capacity in Scotland stands at 1379MW. The study has shown that there are still 657MW of financially viable hydro schemes to exploit. Using expected load factors of 40% for run-of-river schemes and close to 100% for storage schemes, the total number of additional homes that could be powered by hydroelectricity is close to 600,000. The equivalent output would be 2.98TWh/yr. However, grid and environmental constraints mean that only some of this could be connected.

‘This study has shown that the available and economical hydro resource in Scotland can play a significant role in reaching our renewable energy targets,’ Mather said. ‘We are keen to get a better alignment between communities, statutory bodies and developers. This report will help us to do that.’

Co-author of the study, Nick Forrest, explained that its purpose was not just to quantify the remaining potential for hydro in Scotland, but to identify the main barriers to development. ‘Our approach to model hydro schemes remotely, using a geographical information system called Hydrobot [see p42], allowed us to examine how the total potential varied in response to key factors,’ he said. ‘It takes months to analyse the whole of Scotland, but with the Hydrobot model it can be repeated as often as you like in a fraction of the time.’

‘There are many issues which people regard as holding up the hydro development process,’ Forrest said. ‘Unsurprisingly, market factors such as the cost of electricity are a fundamental influence – this is one reason why hydro development has been very quiet in recent years. Aside from the market, the study showed that the cost of licences is less influential than might have been thought, while planning restrictions in environmentally sensitive areas have a very strong reducing effect on the national total.’

The study strongly recommends that procedural change is worthy of immediate attention and states: ‘It is now evident that factors such as natural heritage designations and business rates will dictate how much of a contribution hydro power will make in practice. Therefore, there is justification to scrutinise the hydro planning process for unnecessary delays and restrictions, particularly where the impacts are weaker and defensible with simple mitigation measures, without sacrificing an appropriate level of environmental conservation.’

The areas highlighted as being in need of further research include:

• The effect of natural heritage land designations upon the success rate and size of hydro schemes.

• The impact of offsetting local consumption.

• A detailed survey of existing weirs across Scotland.

‘Previously,’ Forrest added, ‘it may have been hard to justify spending time and resources changing the planning framework when the benefits are unclear. We are hopeful now that the results of the study will encourage local and central government to further improve the planning process.’

Steps have already been taken in the right direction. The Scottish government has committed to process planning applications within nine months where there is no need for a public enquiry. ‘However,’ Forrest cautioned, ‘we hope that the nine month target will not be achieved by simply shifting the point at which an application is declared “received”, rather than speeding up the planner’s own processes.’

Energy Minister Jim Mather added that the FREDS hydro sub group is looking at further opportunities and barriers facing the sector. It will be making recommendations to the Scottish government within the early part of this year. Forrest hopes that these will include one important recommendation to ensure the future success of new hydro development. ‘We must press the government to develop a transmission and distribution network that can handle the renewable energy that Scotland is ready to produce,’ he said.

From recent calculations it appears, helped by hydro, that Scotland is more than ready to meet its renewable energy targets. ‘I can safely say that our first ambitious renewables target will be met,’ First Minister Alex Salmond said recently.

Thirty six renewable project applications, totalling 2.5GW, are currently before the Scottish government’s energy consents unit. Nine of these are for a total of 25MW of hydro.

Current installed renewables capacity in Scotland totals 2.8GW. Most consented projects will be operating by 2011, and with time for more projects to still come forward, the government is confident it will be well on course to meet the target of 5GW.

Scotland’s First Minister has his eye on the future. ‘The legacy of Scottish hydro will extend into the future,’ he said. ‘There might be ten times as many hydro projects coming through in the next few years.’

Referring to the 100MW Glendoe project scheduled to be open in spring 2009, the Energy Minister said that, although this will make a magnificent contribution to Scotland’s renewables capacity, ‘we are unlikely to see much in the way of further large scale hydro development’.

‘But there is huge untapped potential and a sustainable and profitable future in smaller and micro hydro schemes,’ he said. ‘Each scheme would have to be assessed on its own merits, but if we can turn the tap on to new hydro power we can tackle climate change and continue to stimulate economic growth.’

Economic growth is also on Nick Forrest’s mind in the current financial climate. ‘This report should offer comfort to the construction industry whose reduced workload in the housing sector may be slightly offset by an increase in the renewables industry,’ he said. ‘With over 1000 financially viable hydro schemes in the small bracket (up to 5MW), there is a lot of potential.’

Scotland’s hydro heyday can be traced back to the 1950s and 1960s. Over 50 years later its future has never looked brighter. Scotland’s hydro power legacy is set to live on. As the country’s First Minister said: ‘I think hydro power is the most successful form of power generation in Scottish history.’