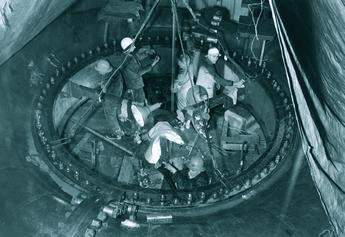 THE key elements of Australia’s new power sector strategy, which was published in June this year, may give fresh impetus to the development of hydroelectric power projects in the country. The government’s long term plans, detailed in the ‘Securing Australia’s Energy Future’ report, have retained a major role for coal in Australian power generation, while the failure to extend the Mandatory Renewable Energy Target (MRET) has dismayed environmentalists. However, the government’s decision to define hydroelectric schemes as renewable energy projects under MRET could trigger the construction of a host of new projects.

In presenting the report, Prime Minister John Howard argued: ‘For the foreseeable future, coal, oil and gas will meet the bulk of Australia’s energy needs. Australia cannot afford to put at risk…industries that directly employ 120,000 Australians and which earn more than A$24B [US$18.6B] a year in export income. The energy advantage provided by our resources is something Australia must not throw away.’ This appeared to play down the chances of new hydro schemes.

Moreover, the government seems to have given hydroelectric research a low priority in terms of energy sector research. Each form of power generation has been placed into one of three categories: ‘market leader’, where it is hoped that Australia can play a leading role in international research and development efforts; ‘fast follower’, where the government wants the country to be in a strong position to quickly follow up international developments; and ‘reserve’, where the country is to monitor international developments and follow up as needed.

While wave and gas technology have been placed in the ‘fast follower’ category, large scale hydro projects have been allocated as ‘reserve’. However, this decision appears to be based upon an acknowledgement that the economic benefits of hydroelectric are already known and so require limited investment in new research.

The government has upset environmentalists by arguing that it is not worth rapidly changing energy policy to cut emissions because, as the report states: ‘Australian greenhouse gas emissions are about 1.6% of world emissions and are too small for Australia to make a difference on its own’. However, a MRET of 2% remains in place up to 2020, so that all electricity suppliers must source at least 2% of their power needs from renewable sources.

As a result, power suppliers must be able to submit the required number of RECs at the end of each year, so those that have failed to purchase sufficient renewable electricity must buy RECs from those with a surplus. The MRET is being increased each year up to 2010, when the 2% target should be attained. Fines of A$40 per MWh (US$31) of renewable energy not purchased are imposed. While solar and particularly wind power projects are aiming to make the most of the MRET, the government has surprised many by including any new hydroelectric schemes in its definition of those renewable energy sources that can qualify for MRET status. However, only projects developed after 1 January 1997 qualify for certification.

Geographical pros and cons
At present, hydroelectric projects play a distinct second fiddle to thermal power plants. The lion’s share of current generating capacity is provided by coal fired units, while large gas fields discovered off the north-west coast are likely to supply an increasing proportion of new plants over the decade to come, if and when the infrastructure required to transport gas and/or electricity from the north-west to the south-east is finally developed. A genuine national power pool has yet to emerge from the years of tightly regulated state orientated power sectors, while the emerging private sector power companies have not received enough financial inducements from the government to finance transmission lines across the interior.

Australia’s geography is both the biggest strength and the greatest weakness of the country’s hydro sector. The country’s population and industrial activity is very heavily concentrated in the south-east of the country, with only a scattering of activity around the rest of the coastal fringe and a very lightly populated interior. Indeed, so few people live in the interior that it is largely irrelevant on the radar of the power sector. It is not worth connecting most areas to state power grids and so off-grid power generation is required.

While small hydro schemes play a large role in off-grid schemes in much of the world, most of Australia is so arid that solar power is the more usual option. The country’s main rivers are concentrated in the south-east, where the combination of a more mountainous landscape and more temperate climate places the most obvious locations for hydro projects within reach of the main centres of electricity demand. Indeed, 75% of continental Australia’s hydroelectric capacity is located in the Murray-Darling Basin of the south-east.

The region hosts Australia’s biggest hydro scheme to date, the Snowy hydro scheme in the Snowy Mountains of the Southern Alps. Snowy Hydro Ltd has been set up by the state government of Victoria and New South Wales, plus the federal (Commonwealth) government to manage the project on the Murrumbidgee and Murray rivers in the Kosciuszko National Park. The Snowy Mountains Scheme was an enormous engineering undertaking, aimed at improving water supply as much as generating electricity. It includes 31 generating units at seven separate power plants, 16 large dams, 80km of aqueducts and tunnels totalling 145km, all of which were developed between 1949 and 1974. The Tumut 3 pumped storage plant is the biggest in Australia with generating capacity of 1500MW.

The seven plants have combined generating capacity of 3756MW and although production varies from year to year according to rainfall, average production stands at 4500GW hours a year. Snowy Hydro accounts for 74% of all renewable energy supplied to the National Energy Market, the expanding power grid that now includes most Australian states, as well as almost half of the country’s total hydroelectric generating capacity of 7600MW. Equity in Snowy Hydro Limited is still divided between its original sponsors, the government of New South Wales, with a 58% stake, Victoria (29%) and the Commonwealth government (13%). Electricity revenues cover all project costs, allowing the company to supply water for irrigation to the west of the Great Dividing Range.

Most of the country’s remaining hydroelectric capacity is located in Tasmania and is managed by the Tasmanian Hydroelectric Corporation. The company operates 31 plants on the island, of which 27 are hydroelectric units fed by more than 50 major schemes. There are also a number of pumped storage facilities, such as the Wivenhoe scheme in Queensland, which are designed to supply peak period demand. However, electricity generated by such projects does not qualify as renewable energy because power from thermal plants is used to pump water back up to the storage dam.

The potential for new large hydro projects in the country is limited because of a combination of the lack of suitable sites and opposition from environmentalists, so to some extent it makes little difference whether large hydro schemes qualify under MRET. The inclusion of micro hydro projects, however, could give a boost to smaller schemes across the country. The most likely increases in large hydro generating capacity are likely to result from technical improvements at existing sites.
Hydro Tasmania has carried out feasibility studies on the development of power plants at existing dams that were built purely in order to improve irrigation.

Indeed, as the table opposite demonstrates, irrigation needs have played a leading role in the development of most dam projects on continental Australia, although electricity requirements have been more important in Tasmania.

While there is a great deal of opposition to new hydro schemes because of the loss of both farmland and some of the most ecologically diverse areas of the country, environmentalists tend to support the development of small scale hydro projects, particularly where there is no valley flooding. Unfortunately there are relatively few suitable locations for such micro hydro schemes in some parts of the country because of the seasonal nature of many small or medium sized rivers.

Outlook
The most recent data indicates a rapid increase in the amount of carbon dioxide
in the global atmosphere, and so international pressure on Australia to reduce its emissions is likely to grow. Australia’s emissions of carbon per capita are very high: taking figures from 1999, only the US and Luxembourg top Australia’s 16.95 tonnes of carbon per person per year. Despite this, the government has so far followed the US policy of not putting economic growth at risk by seeking to reduce its dependence on coal fired plants and favours the promotion of geosequestration as the best method of cutting emissions.

However, opposition political parties have promised to greatly increase the MRET if and when they take power and this could provide yet more demand for hydro schemes. Joel Fitzgibbon, the energy spokesperson for the main opposition group, the Labor Party, says of Howard: ‘The Prime Minister has no plan to address Australia’s growing dependence on imported oil, or the looming crisis in energy infrastructure investment.’ Fitzgibbon’s party is committed to increasing the MRET to 5% by 2010 and the successful operation of the scheme to date indicates that the MRET could easily be increased as and when required.

Finally, further pressure could come from state governments as each state can adopt its own energy strategy. The government of New South Wales has already passed legislation requiring electricity retailers to reduce carbon emissions to 5% below 1990 levels by 2007, in contrast with a national target of restraining emissions to 8% above the 1990 levels by the same date. It seems only a matter of time before Australia decides to increase the proportion of its electricity needs provided by renewable sources, including hydro schemes.