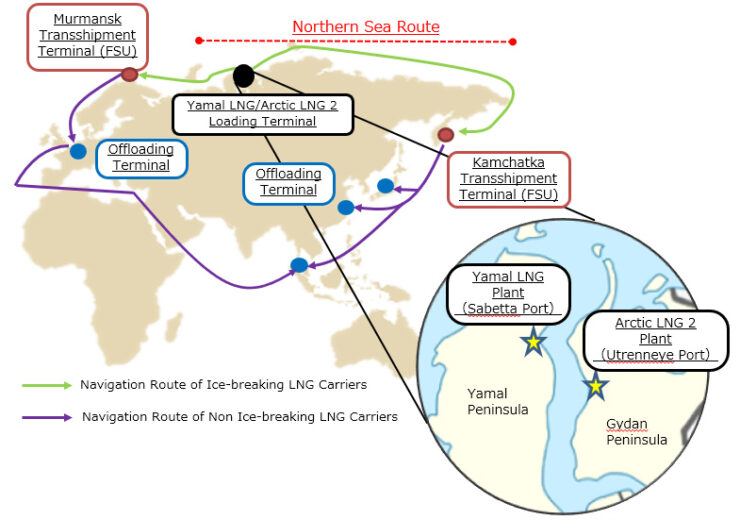 The vessels are scheduled for delivery in 2023. Credit: Mitsui O.S.K.Lines

The agreements were signed by MOL subsidiary on 28 October.

The vessels will be built by Korea-based Daewoo Shipbuilding & Marine Engineering.

The three vessels will be delivered in 2023.

From an LNG loading terminal on the Gydan Peninsula in the Russian Arctic, the three vessels will transport LNG to the floating LNG storage units (FSU).

The FSU will be installed at the transhipment terminal in Kamchatka (eastbound) and Murmansk (westbound) via the Northern Sea route.

In comparison to MOL’s previous icebreaking LNG vessels, these new ships will have a narrower width, hull form optimized for breaking ice.

These vessels will have an increased propulsion engine output, which will enable the vessels to sail east via the Northern Sea Route throughout the year.

The older vessels of MOL can only sail eastbound in the Northern Sea Route mostly in summers and autumns when the ice is thin.

The new LNG vessels can transport LNG to the FSUs in the east and west throughout the year, and will enable efficient year-round transportation from the Russian Arctic to areas of demand which includes Asia, claimed Mitsui Lines.

Due to the eastbound transportation route, around 65% of the distance of the voyage is expected to reduce. This is in contrast with the westbound route via the Suez Canal for Asian destinations.

With three icebreaking LNG carriers, MOL has been transporting LNG through the Northern Sea Route since March 2018 for the Yamal LNG Project in Russia.