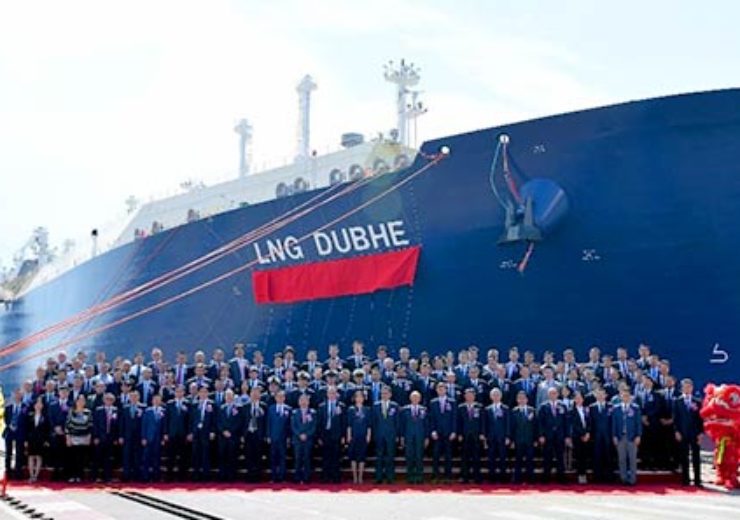 As many participants in the Yamal LNG project looked on, the newbuilt vessel was named the “LNG DUBHE” at the Hudong shipyard. The vessel was named “LNG DUBHE” after a star in the constellation Ursa Major and is the first of four newbuilding conventional LNG Carriers for the Yamal LNG Project announced at the end of June, 2017 (*1). The LNG DUBHE is scheduled to go into LNG transportation service for the Yamal LNG project following its delivery at the shipyard in Hudong at the end of October.

MOL delivered three ice-breaking LNG carriers(*2) to the Project between 2018 and 2019, which are currently engaged in LNG transportation in the Northern Sea Route. For the time being, LNG DUBHE will be engaged in the transport of the Project’s LNG from transshipment terminals in Europe or a location where Ship-to-ship transfer operations (*3) are carried out.

MOL has been operating 10 LNG carriers built in China for other projects(*4), and LNG DUBHE will be the 11th LNG carrier built in China among our fleet. By taking advantage of the experience gained through these Chinese building projects, as well as the assignment of technical experts to Hudong to form a multinational shipbuilding supervision team made up of approximately 40 members, the LNG carriers for the Yamal project are being built to an outstanding quality level.

MOL will help ensure a stable LNG supply for the Yamal LNG project by completing the construction of four LNG carriers as scheduled and subsequently serving safe LNG transportation. MOL is proactive in acquiring new projects, utilizing its strong relationship with China COSCO Shipping and Hudong(*5), and leveraging its knowledge and experience in international cooperative works.